London: ‘A Year in Utopia’

Paradoxically, I think being a full-time parent, despite taking up most of my time, actually allows me some stability and gives focus to my down-time.  Having the autonomy to operate more or less how I want, without interference, gives me the impetus to arrange activities and tasks in a way that suits my strengths.

For the type of art that I make, it is about repetition as commodity: I’m not selling an object but selling my time and presence.  I have learned the benefits of iterating on a work rather than starting afresh each time, which helps to strengthen it and make it repeatable.

In 2017 I presented a (still) developing participatory game and performance art piece (Game of Utopia) at four different local and regional events and undertook a two-week residency in a caravan at Cambridge Artworks. 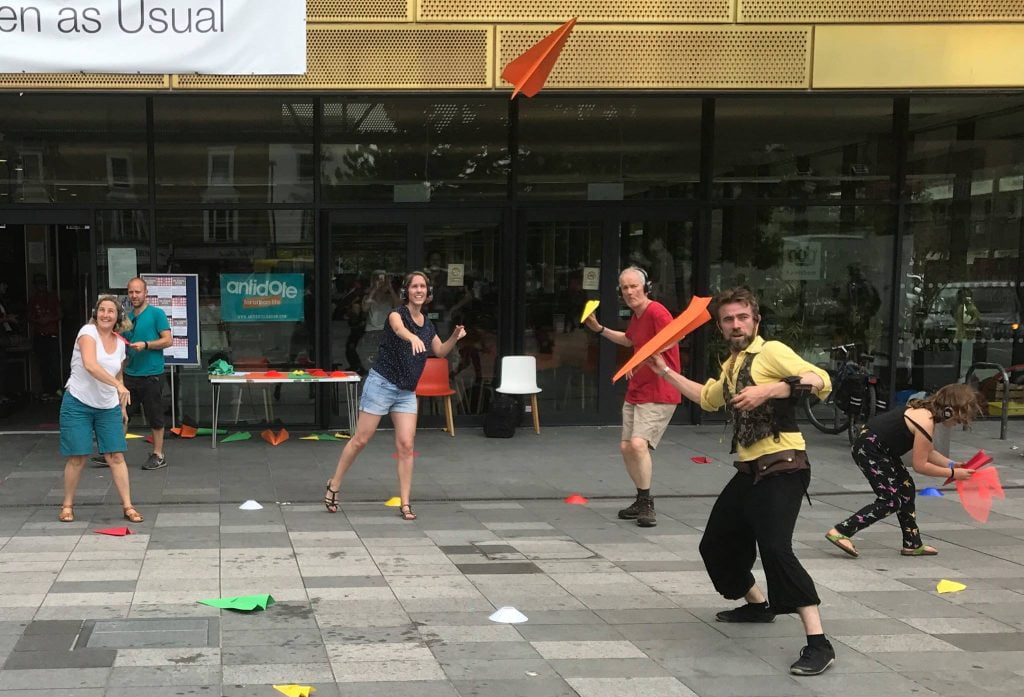 Game of Utopia at The Playful Escape, courtesy of Antidote

After responding to an open call in early 2017, I was invited to showcase Game of Utopia at The Rough Sketches Project: Dystopian Realities, produced by 3s A Crowd and hosted by Ugly Duck.  I visited the warehouse exhibition space in the Bermondsey area of London on a Wednesday in March at 7pm with my children in tow, which involved an arduous trek from London Bridge station with a double buggy, before getting arm ache carrying the youngest child through the three floors of the building.  It was important to see the space to properly formulate my ideas, otherwise I’d only have seen it on the day of the show.  Extensive social media campaigning from all involved contributed to a busy couple of nights, with friendly discussion with one of the artistic directors leading to a further opportunity, as it became apparent that my work would be a good fit for a mid-June event called The Playful Escape, as well as an ideal way to recycle the materials previously used.

Us and Them #10 was a work in progress event for the Tetrad Collective taking place at Attenborough Arts Centre in Leicester at the end of April.  Tetrad provided technical support, rehearsal time and photographic documentation of my performance as well as promotion of the event as a whole, alongside extensive post-show feedback. The logistics of travelling from London for this event were helped by the fact that my home town is not too far away from Leicester and as such, I was able to stay with my parents for that weekend, as I also did later on for the mid-October Provocative Pedagogies conference at University of Lincoln, where I modified Game of Utopia as a collaborative workshop.  From Tetrad I was paid a £50 fee for my contribution, where Game of Utopia was a 25 minute performance that allowed me to try out my idea in a theatre setting, enabling me to find out how the framing changes the work.  Following the conference I entered into email correspondence with my workshop collaborators, asking some followup questions about their experience, and received valuable feedback as a result. 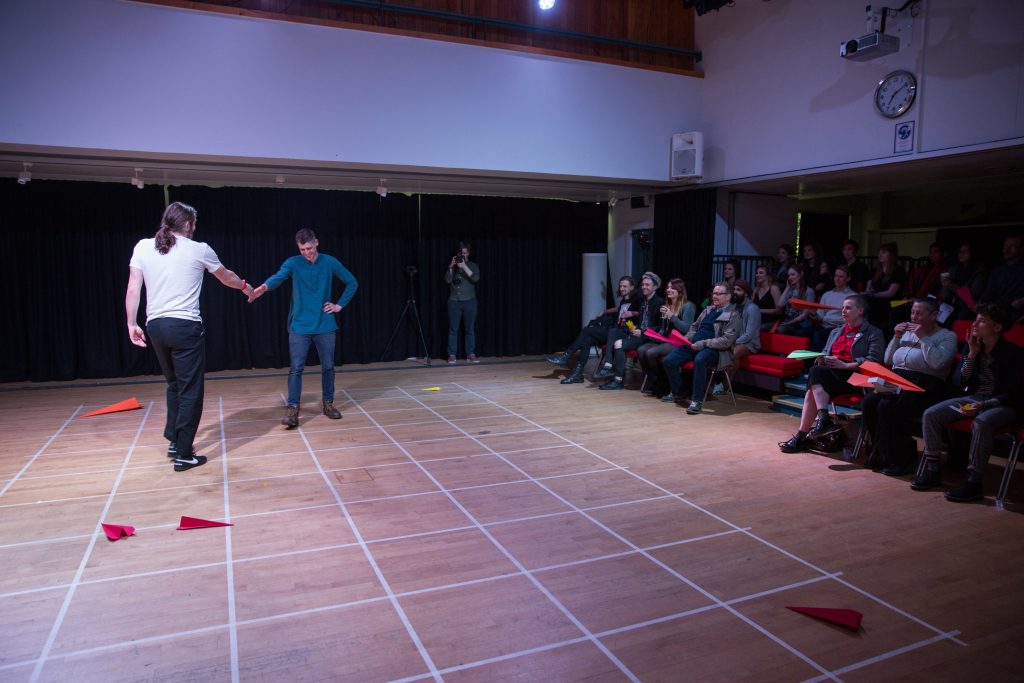 Game of Utopia at Us and Them #10, courtesy of David Wilson Clarke on behalf of Tetrad

Adjacent to these activities I interrogated other strands of my practice, epitomised by my stay in Cambridge at the converted ‘caravanserai’ studio that I occupied for two weeks in September.  Due to issues with childcare, I wasn’t present in the studio each day.  However, with the full backing of studio staff, who were keen to accommodate people in my situation, I was able to make arrangements.  For the first week, my wife took holiday from work and I stayed in the city for five nights at our own expense.  The following week my mum looked after the children so I could spend two full days at the studio and finally, for the closing weekend, with my wife being off work anyway I could conclude the residency by staying in Cambridge for a further two days.  In total, as a family we paid for seven nights of accommodation and three return train journeys.  At the end of the residency I had an exhibition in the caravan studio space, with other resident artists and the local community invited to talk with me and see my works in situ.

My wife works full-time and we rent a two-bedroom flat a mere five minute walk from her Twickenham, South West London office in order to alleviate the time and costs associated with commuting and to maximise the time spent with our children.  This lightens the load for both of us and allows for some flexibility when it comes to doing other projects, where my wife is left alone to look after our two daughters as I travel and tend to artistic pursuits.  These usually take place in other areas of London, since the East and South East, where I studied and where we mostly lived pre-children, is still the go-to area for the more left-field and experimental activities that correlate with my interests.  Most of the opportunities that I apply for originate in these areas and I have found the online application process of CuratorSpace to be particularly useful, with other opportunities found on the Artsadmin E-digest and Art Monthly Newsletter.

Although challenging, it is still possible to complete administrative tasks relating to showing work when parenting.  I can fire off an email when the children are engrossed in play and even catch up on some reading during nap-time and nursery. 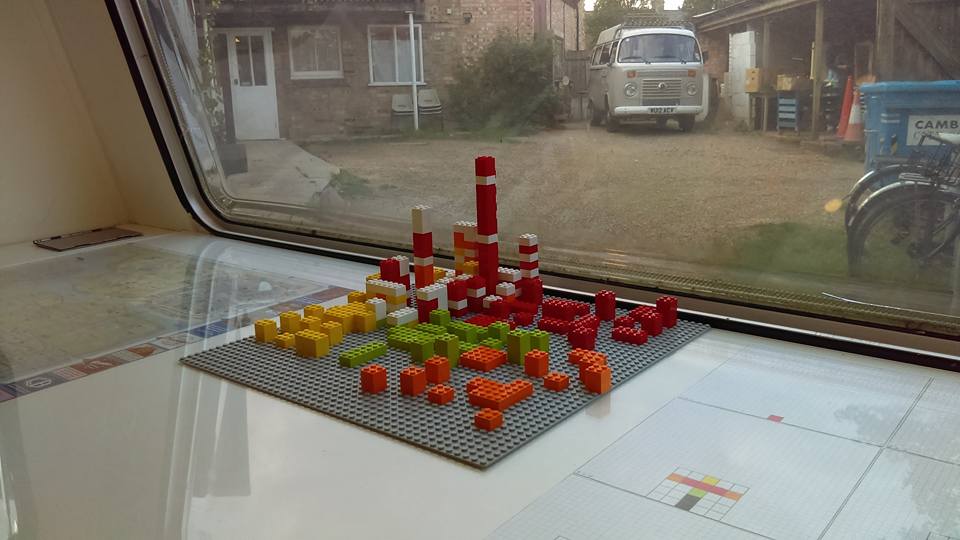 Wine City at Cambridge Artworks, courtesy of the artist

I work part time as a duty manager at a fringe theatre in Camberwell and at London-based Premier League football clubs on match days, implementing and overseeing on-pitch and perimeter advertising initiatives at various stadia – which is a welcome respite from childcare and a chance for me to indulge a long-standing passion for football at the same time as earning some extra cash.  These jobs allow me to be around two lively and energising forms of performance, which feeds back into my practice in subtle and interesting ways both in terms of modes of display and aspects of the spectacle.

Ordinarily I work at the dining table from around eight until late most nights, not accounting for potential distractions from the children after this time.  I have to be tidy and put everything out of reach ready for the morning when idle hands are present, meaning I can’t leave out objects or displays to contemplate over time.  It would be indulgent to have a studio for a practice that doesn’t often need one, but in any case having a studio is an expense that I’d struggle to justify at present.  Our rent is really high and only just about covered by our combined salary.  In order to live where we do with enough room for the four of us, we would be hard pressed to find anything cheaper.  When doing computer or table-based work there is always the temptation to stay up late if I’m being productive and this can have a knock-on effect the next day.  This is the life we have chosen but there can be a sense of guilt surrounding my artistic impulse.  New communities found both within London and further afield, with their own specific contexts, keep the momentum going and the work alive, enabling a utopia built on solid foundations.

Article by Joe Stevens: artist and stay-at-home-dad to two young daughters, now aged one and four. He has lived in London since arriving to study in 2006, and makes work across the UK. You can keep in touch with Joe Stevens via his website and Twitter.

Keen to learn more about art scenes across the UK? a-n’s ongoing monthly Scene Report focuses on the visual arts ecology of towns, cities and regions across the UK and features articles from artists located in Nottingham, Swansea, Dumfries, Belfast, and many more.

The Light of Day

Simon Paris – Theatre Director and Producer. From postponed ‘The Importance of Being… Earnest?’ Real audience members are cast on the spot to star in a play when the lead actor… Continue Reading The Light of Day