Bogotá: The Sprawling Urban Jungle in the Clouds

When I arrived in Bogotá, I didn’t have many expectations. I packed in my job and studio in London on a whim and changed an existing flight I had to Brazil to come here instead. For what could have been a huge blunder and error of judgement it all worked out relatively well. Luckily, I had some good friends here already (Colombian natives who I had studied with at Central Saint Martin’s several years before) but apart from that my Spanish was almost non-existent and the only real thing I had in my favour was my open attitude for the adventure and the warmth of the people I met. 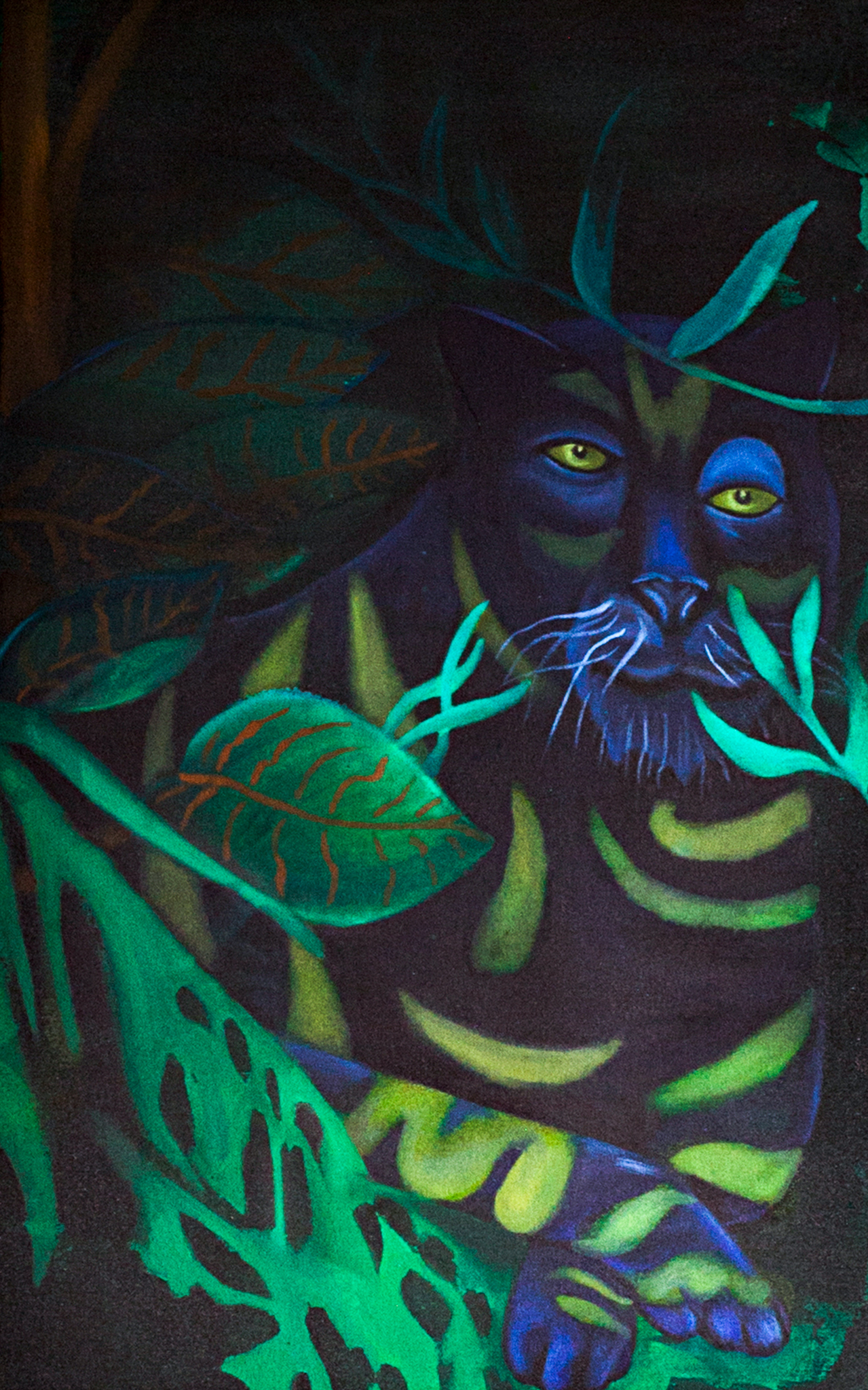 Contrary to many people’s expectations, Bogotá is not a tropical paradise in the heart of a conflicted war zone, (I blame ‘Mr. and Mrs. Smith’ as well as other mainstream media such as Netflix’s ‘Narcos’ series for this). Sure there are palm trees and an abundance of tropical foliage, sure the guerrilla groups FARC and ELN still exist and have continued fighting in a breach of the 2016 Peace Deal, but it is a lot safer now than it ever has been and nestled in the Andes mountains almost 3km above sea-level the weather is extremely temperamental; you can experience all seasons in just one day, from prickly heat to torrential rain and lightning storms.

Some of the things that immediately surprised me were the traffic, pollution and general chaos of the city. The cracked and overgrown pavements where life pervades and plants blossom is an accurate analogy for the resourcefulness of the local artists and people in this concrete jungle. There are pockets of artists and galleries in different areas, my favourite of which being San Felipe – a district with many galleries that host music events, open studios and late exhibition openings. Many areas are still being rejuvenated and it’s wise to avoid if alone or late at night, San Felipe is still one of these areas but you can see the positive changes being made with the introduction of more creative enterprises and people. Some of my favourites are Espacio KB gallery which hosts open calls for art as well as many music events with live (usually electronic) music, BandyBandy gallery which is another recent addition to the area and mainly shows work of Colombian artists for instance most recently Federico Rios’ documentary photography of the FARC and intimate depictions of the people affected. With many of these opening events they are packed and the crowd of guests spills from the gallery spaces into the streets. Often the artworks themselves usually have a rough and gritty quality (with regards to both materiality and subject matter) which exacerbates this feeling of an intrusion from the city into the confines of each gallery space.

I have been fortunate and safe during my time here although there is still an edgy and darker underbelly to the city with the night life, street crime, and its continued history of prostitution and narcotrafficking. I’d like to say that it’s easy to avoid this and stay safe however several friends have been robbed during broad daylight and even while avoiding dangerous areas.

In the downtown there are some beautiful historic buildings such as the National Museum and Museo del Oro(‘Gold Museum’) which boast great collections of Pre-Columbian art,  gold and artefacts. Fragmentos is another interesting gallery recently opened with modernist architecture built within the crumbling walls of a colonialist house, Doris Salcedo designed the brushed steel floor to be made from the forfeited weapons during the Peace Deal and hammered together by the hands of women affected by the conflict. I also couldn’t neglect to mention the breath-taking landscapes and scenery nestled just a short drive outside of the city; stupendous hikes to waterfalls and eco-parks all within an hour’s commute. 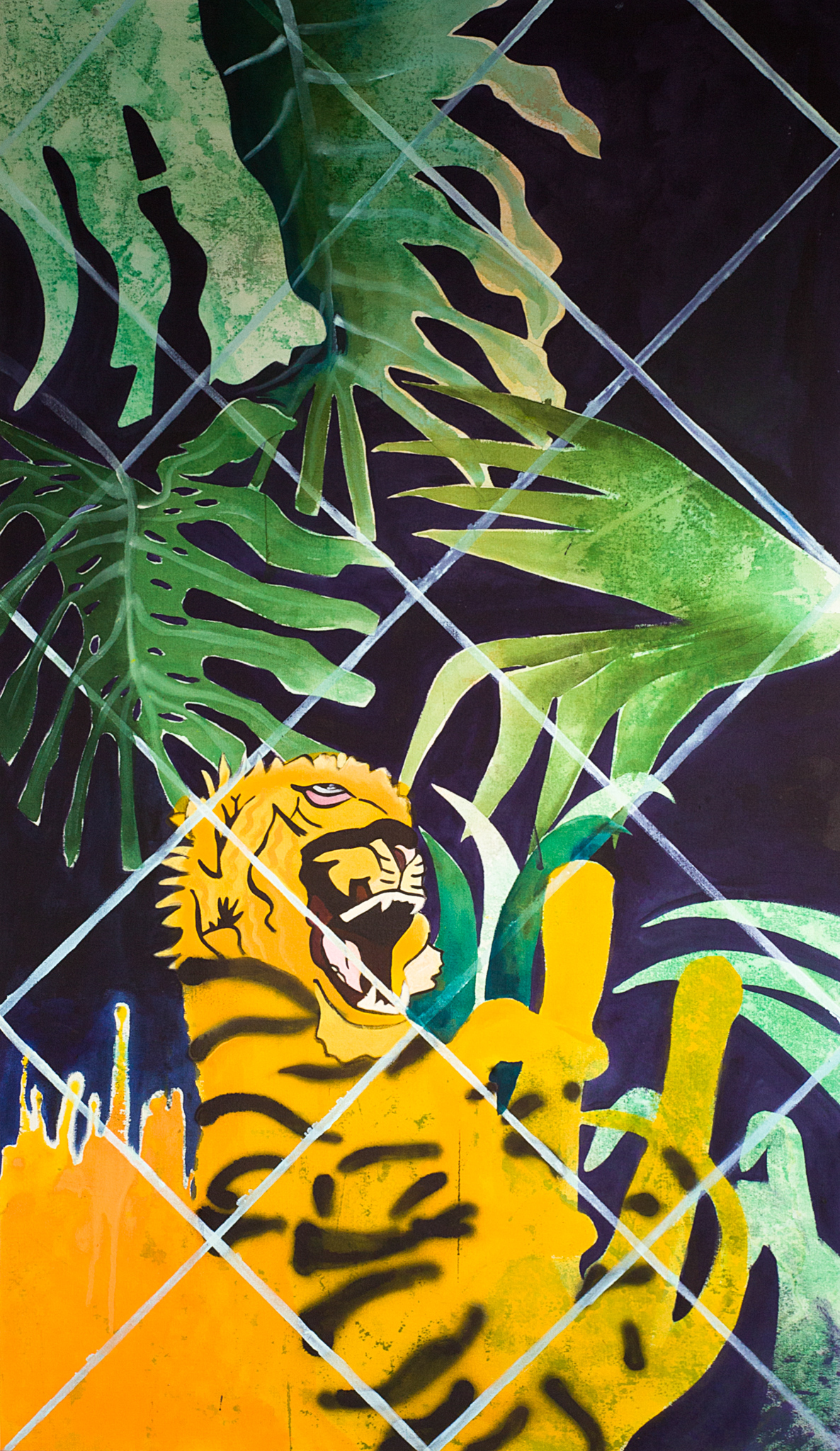 Ben Stephenson, Is This What You Wanted

The first weeks here were tough as I learned to navigate the language and city; there is a ‘Transmilenio’ transport system as well as other local buses that don’t seem to have enough seats or a speed limit and demand the utmost core strength just to stay standing at times, however this is the fastest and one of the cheapest ways to get around when not in peak traffic. The terrain is relatively flat and there are designated cycle paths so a bike or scooter are also effective (when it isn’t raining!)

Within a month of arriving I had found a part-time job teaching English as well as a studio and accommodation through mutual friends who were fortunately just setting up a new creative space called ‘Casa Hibridos’. A collaborative project initiated by Silvana Tantimonaco and her partner Victoria Uribe Corredor, both Colombians partly raised in the USA and with personalities larger than life, Silvana’s alter ego seems reminiscent of Frida Kahlo at times and not just for her appearance but also through her flamboyant theatre events as well as Tarot reading sessions. Similarly it is this eccentric touch which has been brought to Casa Hibridos and the eclectic style of the building’s bright walls decorated with lavish furniture is something I wouldn’t have expected to work but in typical Colombian style this motley crew somehow does.  It was a frantic time during the initial months, adjusting to not only the lifestyle changes but also the physical changes in adapting an old disused house into workshops, a gallery, restaurant and a home. I found that this time was extremely fundamental in my progression and although at times difficult it was very much worth the challenge. 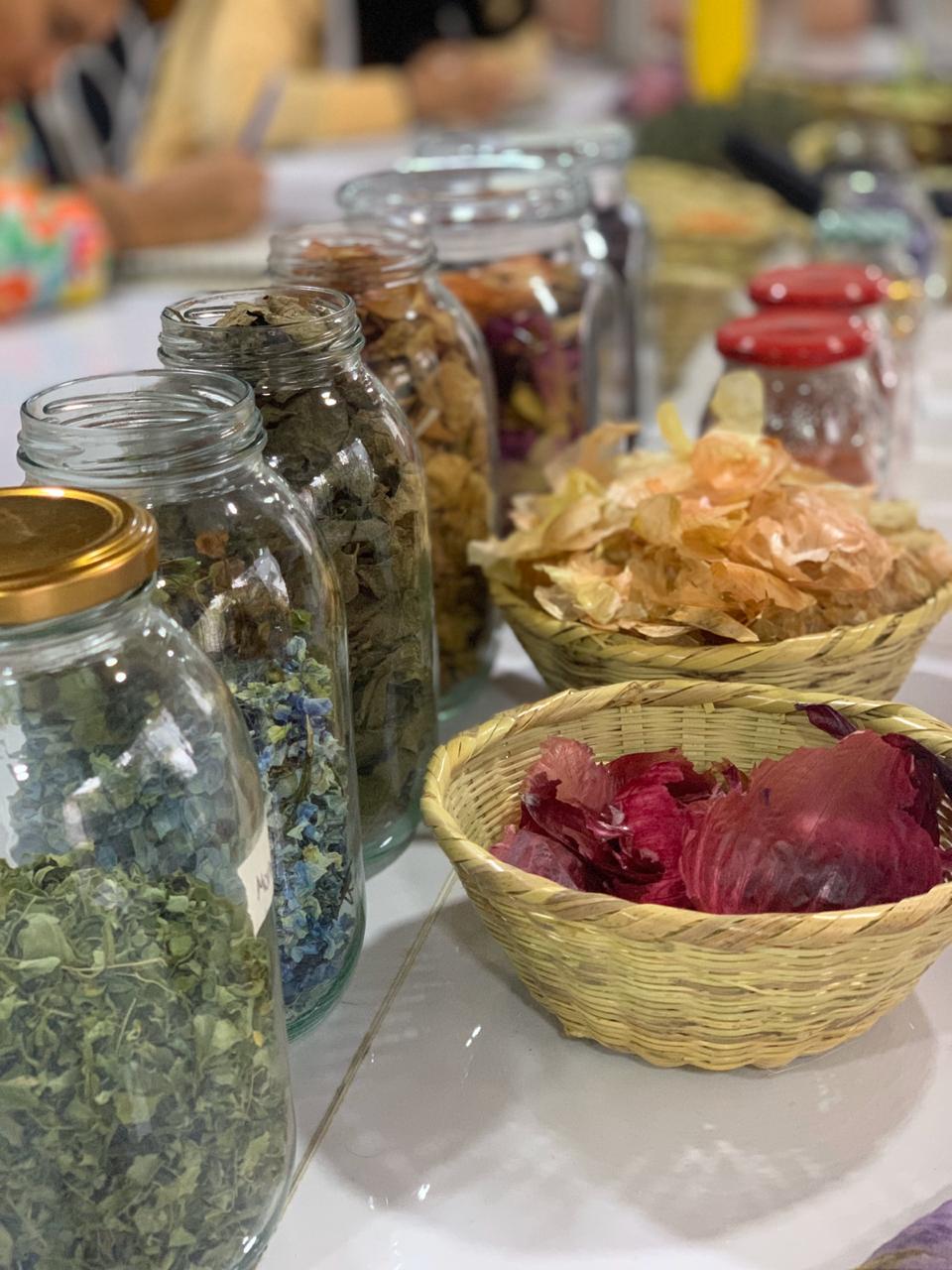 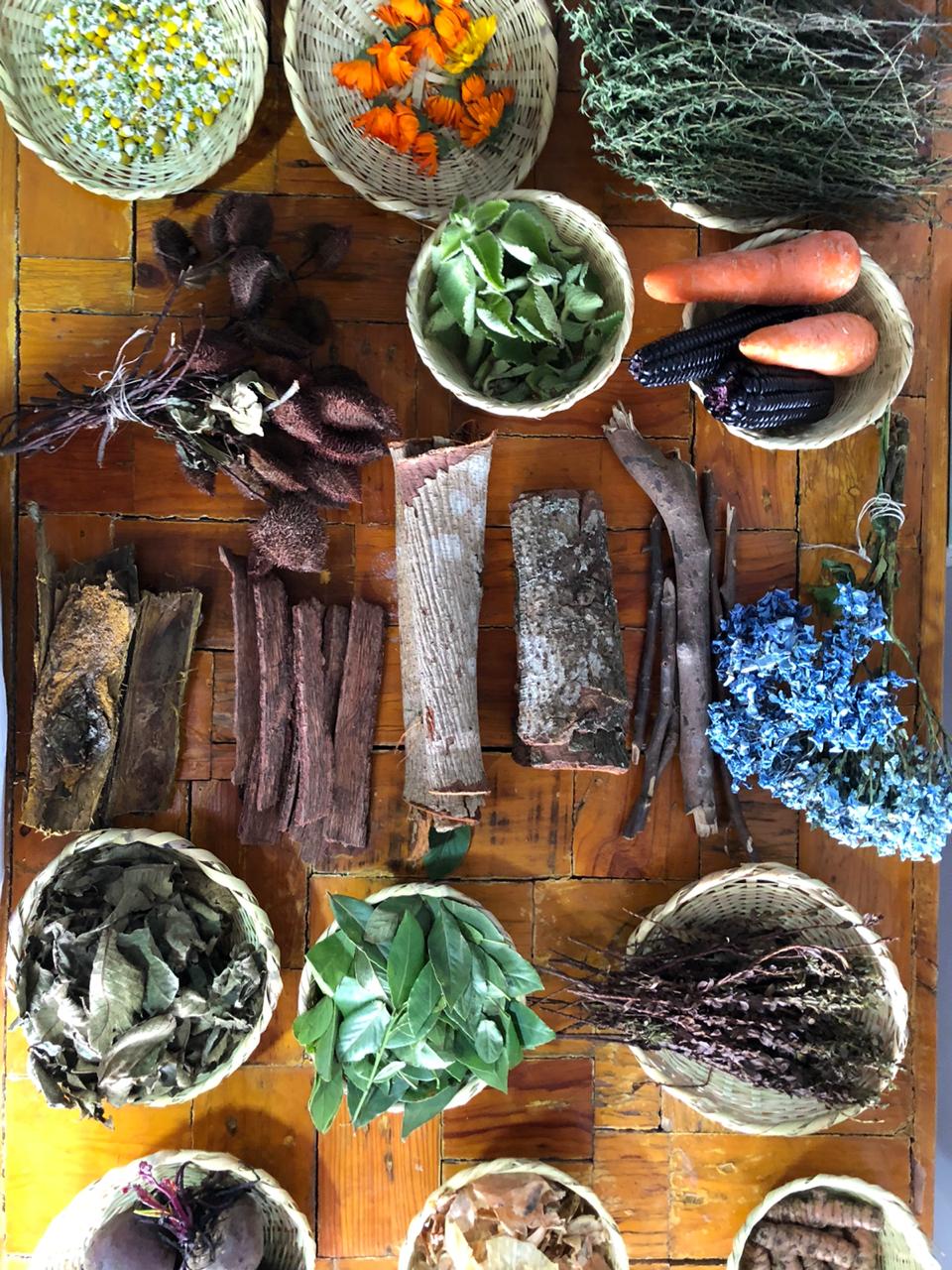 Having been here for a year now I’ve come to accept any shortcomings and have grown to love the city.  Bogotá appears to me as a carnivorous beast in the belly of the Andes mountains consumed by an entrepreneurial spirit and ready to take you with it. Nothing is disregarded; the litter of cardboard cartons, concrete and broken wood that may cover the corners at night has been collected and recycled before the morning by ‘Recicladores’ – men and women who pull loaded wooden carts often painted and decorated, down busy highways/roads. As well as the ‘Vendedores Ambulantes’ (literally translated as ‘walking vendors’) – street sellers who wheel their carts full of sweets and cigarettes through the streets. This energy and enthusiasm for using every resource available has also pervaded my own work.

Coming from a European art education but always fascinated by notions of the exotic I was intrigued to see how this would play into my artistic practice. Firstly the subject matter, inspired by the strange and dreamlike depictions of nature and the exotic through art historical canons such as Fauvism and Post-Impressionism I have been attempting to critique the works of Gauguin and Henri Rousseau in a humorous and lighthearted way. As mentioned earlier, Bogotá is a city high above sea level and away from the Amazon so (apart from the plants) the closest thing to exotic wildlife can be found in Parque Jaime Duque which is a zoo containing many of Pablo Escobar’s confiscated animals (as well as a small theme park), but I wanted to play on this trope of the European tourist/explorer intending to find new and exotic lands and so have combined imagined scenes of these animals with life-studies of plants and images sourced from National Geographic magazines. In another way the use of concrete along with recycled materials and plants in my sculptures has been influenced by the thriftiness of the urban culture and also the meeting of nature with the city, these sculptures are intended to be shown alongside the paintings in my next exhibition ‘La Selva Concreto’ which literally translates as ‘The Concrete Jungle’ but has a nice double-entendre in Spanish with ‘concreto’ referring to both the material as well as the ideology of something being real and corporeal. What’s more, I have been participating in natural dye classes with a local workshop called ‘La Cosmo’ to study the possible dyes produced by different plants and flora, and now I am preparing for my trip to the Amazon for a tailor-made residency programme to work with indigenous communities and learn their traditional dye and pigment extraction techniques which I hope to then bring back to the UK and incorporate into my painting (and perhaps sculpture) practice. It will be interesting to observe how this trip and part of the experience may influence my creative output especially with regards to the authenticity of using different subject matter from what has previously been more of an imagined narrative.

Ben Stephenson is a multidisciplinary artist born in London (UK), he studied at Central Saint Martin’s Byam Shaw School of Art, Wimbledon College of Art, and The Royal Drawing School. His practice incorporates sculpture, printmaking and painting – most often expressed as installations addressing themes of exoticism, animism and the imagined Other, all in an attempt to confront colonial and postcolonial mindsets exacerbated by the naivety of a eurocentric view. For this reason he is currently residing in Colombia where he is engaging with native mythology and archetypes as well as techniques used in traditional handicrafts such as Eco-printing and natural pigment extraction from local flora and vegetation.