Armenia: overview of the visual arts

The new reality proved difficult for many artists who had been until then supported by the Soviet state with free studio spaces, generous bursaries and subsidised art materials in return for political obedience (with many artists schizophrenically dividing their time between publicly making accepted art and their own, private, practice).

New art styles and genres were all of a sudden allowed and Pop Art gained popularity, both as a comment on the new market economy and as a fascination with Western, and particularly American, art – bordering on pastiche, according to many, as it was mostly concerned with form rather than the social reality.

The cultural and educational institutions of the Soviet period did not cease to exist, however, nor did they transform overnight into modern democratic institutions. The Painters’ Union, for instance, seems far more conservative now than it was in the 80s: contemporary artists are often refused membership (even if they are great painters) and there have even been calls for the introduction of licensing of painters.

However, the last two decades of independence also brought the possibility to create a completely new art system – of independent art centres, associations and organisations which formed a new kind of grass-roots level network largely operated on the basis of family or friendship connections. New art education institutions were also created in response to the new situation.

Interestingly, most of those new organisations have been initiated and/or led by artists themselves. The Armenian Center for Contemporary Experimental Art was founded by Iranian-Armenian-American artist Sonia Balassanian, Utopiana was set up by Swiss-based Armenian Anna Barseghian, Open University’s fine art department was initiated by artists Samvel Baghdasaryan, Manvel Baghdasaryan and Ara Gurzadyan , the Mkhitar Sebastatsi Fine Art School is run by artist Grigor Khachaturian. 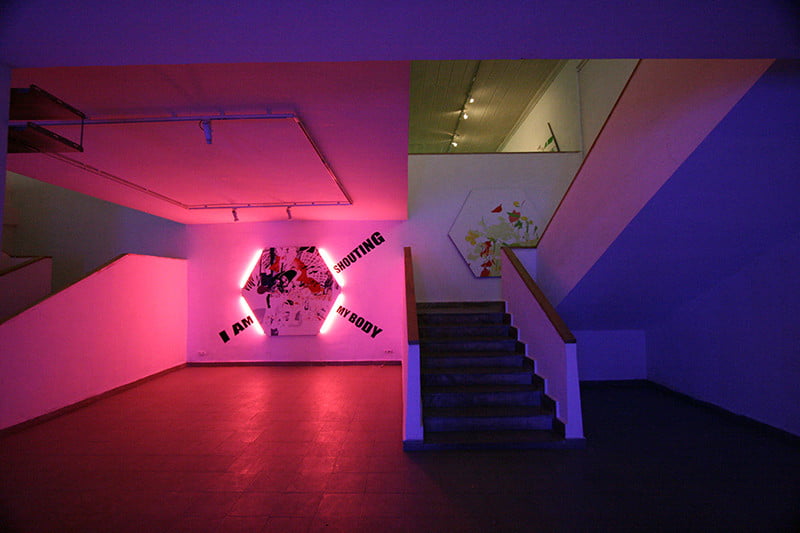 A/M: What is it like to be a contemporary artist living in Armenia today? What do you see as being the main advantages and challenges?

DK: It is not easy to be a contemporary artist in Armenia. Freedom, independence and autonomy, which are the basic concepts of contemporary art, have no place in our culture. To survive as an artist you need to be a commercial artist who produces so called “kitsch” art, or to become a part of political activism, or to make so called “grant art” and forget what art is…

The main challenge for Armenian culture is to overcome the “social realist” and “national romantic” approach in art and not to fear of losing our identity whilst being part of a global culture.

EA: At first I will tell you about Armenian actual situation in art. At present, the situation is highly politicised. The main issues are an illegitimate president and the problems of the Armenian-Turkish border. Armenian artists are always discussing about the cultural revolution problems (how to do it, strategic and tactical problems) in their work.

A/M: Tell us a little about your work and future plans.

EA: Art Laboratory is going to visit Armenian villages and towns and to organise a political art presentation and discussion with citizens and artists (it will be our cultural revolution…).

Recently in ACCEA we opened three solo exhibitions: Karen Ohanyan, Garik Yengibaryan and me. It was one of the big events in contemporary art of the season. The works had a political character, and there was written about that exhibition and in art newspapers and also in opposition newspapers.

A/M: How would you describe Armenian contemporary art?

DK: I think that Armenian culture has big potential. There are a lot of famous Armenian born artists in the world. Armenian contemporary art has communicative and language problems to be understood for Europeans.

A/M: How do you and other Armenian artists you know make a living?

DK: For a living I do many different jobs. I curate exhibitions, work as a graphic designer, and sometimes sell paintings. I know of other artists who teach or some live off grants, some of them sell paintings. I should add, though, that in Armenia local government funds don’t support artists. Usually, artists apply for grants from the Soros Foundation, or other Europeans NGOs which give grant for different kinds of social, political or cultural activities (which for me are not so connected with art).

A/M: What would you like to see happen in the Armenian arts scene in the future – is there anything you would like to change?

EA: What would I like to see happen in the Armenian arts scene? Well, first of all, I would prefer there to be more active young people with leftist-anarchist points of view who would be ready to go to the streets. I would like to see the same in the sphere of contemporary Armenian art, it would help the artists to get out from under the shadow of being the “soviet underground” (of course it does not concern everybody but it’s still very much a presence).

Also I would like to see more modern sculptures and installations in place of traditional monuments and, of course, a little more humour and a more analytical approach in general.

The Armenia country guide was prepared by visual artists Alicja Rogalska and Martin Clarke in 2008.

The WFH Residency was a £1000 award to support artists during the covid-19 / coronavirus pandemic. The deadline for the final round of the residency closed at 10am on 1 July 2020. This slideshow requi… Continue Reading WFH Residency