This piece, as anything and everything else really, grows out of frustration. At least that is how things seem to happen. Frustration comes from caring and caring also implies that some choices have to be made to leave something behind the line, after which some or more attention is paid to the chosen matter. Here frustration also means that some action will be taken in response to the trigger. So when we take these awkwardly composed sentences with confusing subjects and predicates and apply them to art practice, what I mean is that you have to care about something to make art about it. Or, more precisely, I have to care about something to make art based on that particular subject matter, because taking something as a starting point to further it into an art practice is just one of the ways how to make art. A different approach would be to use creative play and see what comes out of it at the end, or after putting the result into different contexts to gain from the various overlapping acquired meanings. The resulting art might also not need to converse with the outer world but stand on its own, complete in its own universe of one and none.

During the last four years I’ve worked on long-term projects, spending approximately a year on each, starting with my sterilization that took me around one and half years to complete. After that came my IVF consultations that took another year but I managed to squeeze in a hymenoplasty there as well. The most recent work has involved the complete coverage of my breasts with black tattoos, the whole process lasting around eight months. 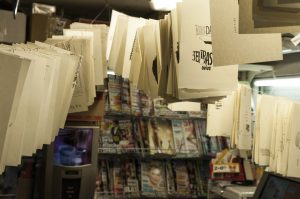 31.12.14 from the series One every working day. 10 months of minimum wage to save up for a sterilization

While quite some time is spent on planning and arranging and just plain emailing, the bodily projects also include the production of the material works about the process such as little performative videos or comical animated narratives. The point is, I am used to undertaking long term projects that I know will take time. I will also most definitely need time to reflect on what has been actually done and how it relates to the existing social, political and cultural conditions as my art practice most certainly participates in their critique. Therefore, it is very hard to respond to any creative calls and to try to whip up something when my last work involved wrapping cling film around bloody milk glands. There are different ways of working and I think of myself as being creative. That seems particularly true when looking back to my BA years when the Academy’s curriculum requested to produce several different works per semester, each with their totally unique justification. A student might relish that lack of commitment to a singular subject matter. However, now I find it hard to explain to someone, myself included, that creating something with  a deadline of less than eight months is pretty impossible. I could create something, of course. I have enough skill to paint something or make a video or some kind of installation. But I will most definitely not care about that piece, at least not more than about anything else I could have made in place of that. This is all about time management as well. There are artists who can create works of great quality and social significance in short periods of time for various different events but I am not able to leave my panic mode when having too many projects to complete at the same time. 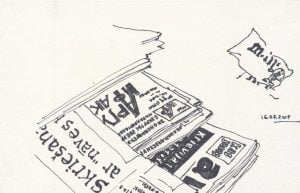 16.03.14 from the series One every working day. 10 months of minimum wage to save up for a sterilization

It is pretty clear that this caring I am talking about is very much tied to commitment. And that commitment is connected to believing that the opportunity is important enough for one to strive to achieve something more, to create something. But that something is usually created for someone to see. I do not care about the lonesome artist who does not need his (because obviously it’s a he, it’s a man’s world) works to be seen by the public. My works are made for the public to recognize the faults in the society so no good will come if the results will be see only by, say, five people. Each and every single one is important, but a years’ long worth of working will not be satisfied by a handful of people.  So I am privileged that my native country Latvia is small enough that my bodily offerings for change towards a feminist and queer future are more visible to a significant sized audience there.

I did not have to worry about what will come next after graduating from my MA as I had a solo show coming up. The most annoying thing was the overall setting at the university already assuming that I as a graduate will be the clueless student going into the unknown without even giving it a chance that I might have the next objective already set. I felt so much out of place during the university’s group chats where everyone else was talking about their confusion about where their ever-changing art practice is going. I had mine in check and I knew what I was doing. This does not mean that I have everything sorted out but in no way could I relate to the Dada-esque way of creating whatever. Right now I am again fortunate to have an invitation to create a piece for a group show in Latvia for October 2019 and I have a show to curate in Latvia for May 2019. I could write another piece about the problems of creating something for a show in a country most British people confuse with Lithuania. I probably will as I was asked to write about art and social activism where I will focus on scale and locality. The publication is for a catalog in Latvia as well, of course. 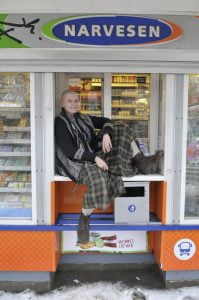 31.12.14 from the series One every working day. 10 months of minimum wage to save up for a sterilization

In between all of this, how could I just let my creative juices flow and immerse myself in the creative play? I do not care about that and that is OK, as I work on long-term projects. Unfortunately that means collaborating is harder and just being a part of something is harder. But there are different ways of working and that is fine.

Mētra Saberova is one of the recipients of the 2018 Lifeboat Residency. Lifeboat is a year-long studio residency, peer mentoring and career development award for MA postgraduates from University of the Arts London.  The artists selected for the 2018 award are Sabrina Fuller, Davide Meneghello, and  Jojo Taylor. The residency is funded by ArtsTemps and supported by ACAVA.

What is artistic success?

What do artists value?