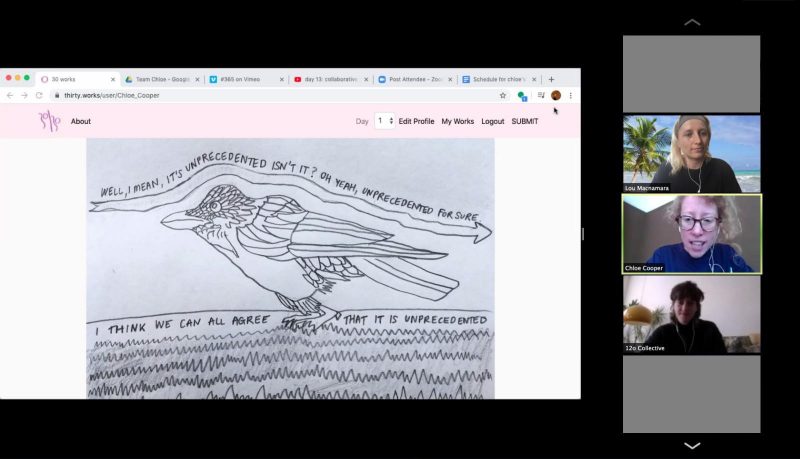 12ø approached me because I run peer mentoring workshops with Artquest as part of the Bloomberg New Contemporaries public programme. We’ve done workshops across the country and I’m always really hyped by how willing artists are to support each other. The workshops are three hours long and we run through the what, why, where, when and how of peer mentoring; covering the practical pros and cons, sharing different formats and models for providing artist-centred critical feedback and encouraging attendees to set up their own peer support groups.

During the Artquest peer mentoring workshops we set up a critical feedback section, where groups speed-crit each others’ work – normally around 10 minutes each – using a sped-up version of Liz Lerman’s critical response process. I learned this process during the first peer group I was in set up by artist Louisa Martin and it blew my mind as it refocuses the critical feedback onto the intentions of the artist (as opposed to the interests of the responders).

12ø were keen to make sure as many artists as possible could be involved so we went for a format that meant over one hour 24 artists could receive feedback on their work. Vibing off of fitness at home online HIIT (High-Intensity  Interval Training) videos I called it High-Intensity Interval Critting (HIIC) with the aim of being as constructive and productive as we could at break-neck speed! For HIIC we followed Liz Lerman’s critical response process except for one of the stages which I cut to make it quicker.

To take part, attendees selected one of their 30/30 submissions and prepared up to 3 questions that they’d like to ask their fellow 30/30 artists about. We split the 24 participants into 4 breakout groups of 6 (facilitated by Eva, Kelly, and Lou from 12ø and me). We followed a 3-2-1 formation (3 minutes of artists as questioners, 2 minutes of fellow 30/30 artists as questioners and 1 minute of opinions), taking it in turns to be supportive responders.

It was successful because it enabled as many artists to take part as possible and to receive and give as much feedback as we could in an hour. It was knackering to think so quickly, and I guess that the “quality” of the critical feedback must’ve started dropping off as people became fatigued. It was hard to be hardcore all the time with the timings, so some people got a bit shortchanged on the timings front.

I think if I do this version of the peer mentoring workshop again, I would have thrown in some more fitness catchphrases like FEEL THE BURN! Overall, I was a bit taken aback by how generous the artists were in support of each other when they hadn’t even met.

What is artistic success?

What do artists value?