One of the many valuable features of the 2018-9 Lifeboat residency – that’s as well as the beautiful studio, the supportive group of talented co-residents, the peer mentoring group and all the help from Artquest – has been the six one-to-one mentoring sessions which come as part of the programme.

Artquest offered helpful suggestions as to potential mentors, but it was up to each of the residents to choose someone who would meet their own particular needs. I took advice, particularly from a previous award holder and from a good friend with strong connections in the art world, and did my own research. Happily, my first choice accepted me as a mentee- Kelly Large is a practicing artist, a curator and a lecturer at the Royal College of Art, with an exhaustive knowledge of the art world, many good contacts and a very straightforward – and kind – approach. 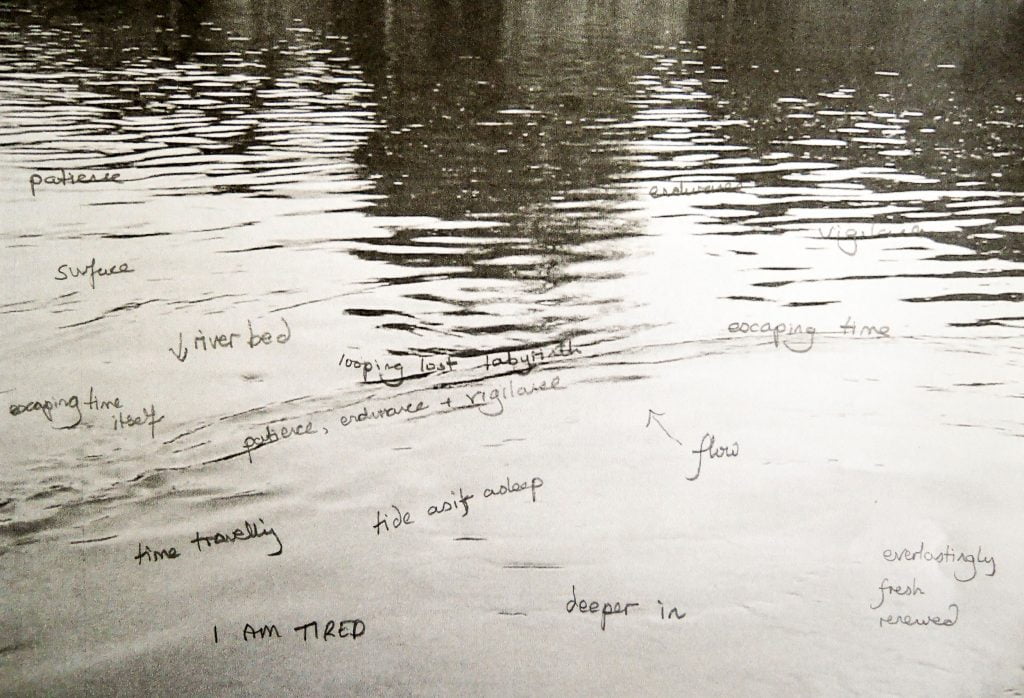 Image credit Sabrina Fuller, Text on digital print from To Meet the Sea

We began with a phone conversation and arranged to meet at the Lifeboat studio where we would have a look at a couple of key works from the last two years and at work in progress. For that meeting she also sent me prompts. The process of self-reflection that Kelly has supported me through has been very helpful in situating myself as an artist – which is what the Lifeboat residency is all about.

This first step in my journey of self-discovery revealed that I wanted to be part of a community that poses questions to society and that encourages society to look beneath the surface: I wanted to engage people and to stimulate them to think about the issues I am exploring. I wanted to situate myself within a network of artists and curators who share my interests in both what the work is about and the process of its making; to be credible, and to contribute to the discourse.

So, the next question was what was I doing well (and less well) to achieve this? My work concerns difference, and over the last few years I’ve returned to my feminism as the basis for my exploration of difference. I’ve been making work in partnership with other women, working with them to present their words and voices, and also building strong networks with feminist and other – often queer – artists and curators through various groups -focussed on feminism, writing, photography, moving image, performance and sound – that I have become a part of. The residency was giving me the space and time to make work and I was showing it for crits and discussion. Through the residency we had created a peer-mentoring group for crits, networks, and potential shows. I was meeting regularly with my mentor. And I was going to shows, conferences, courses, workshops and thinking about how what I was seeing, hearing and learning related to my own practice. What I was doing less well hinged on a lack of confidence in myself and my work, for which the residency in general, and the one-to-one mentoring process in particular, have been transformative.

Kelly helped me to find an answer to that question ‘What sort of artist do you want to be?’ She asked me to identify four artists whose practice, and how they placed themselves in the art world, were an inspiration to me. My chosen artists were Rehana Zahman, Alex Martinis-Roe, Eelyn Lee and Ben Rivers. They all base their work on interviews, workshops or conversations which they then work in to a script; all four are highly successful collaborators; they all have a political agenda which relates to exploring difference and attitudes to difference. 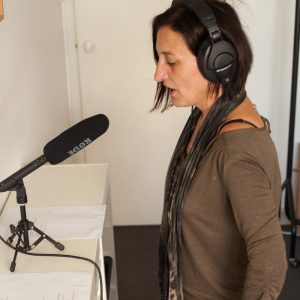 Time is important to all my chosen artists – the past as a basis to reimagine the future; parallel temporalities; slowness both in the making and in the presentation of work; and the mixing of reality and mythology. Their practice has given me both confidence and ideas for my own, current, explorations of time and my uncovering of non-linear, parallel and cyclical conceptions of time from the words and voices of the older women I have been interviewing.

The artists I chose all make highly poetic work – visually and in terms of the way they combine sound, voice, tone and text. Their work is often based in a strong sense of place, and this, again, has strengthened the way I use sounds and images of place in my work, both as metaphor and as contexts which shape individual and shared subjectivities, making me more sensible of relationships between time, age and community. Reflecting on these artists’ practices has given me insights in to how I can develop my own work with groups, as well as individuals, to include many subjectivities.

As well as my own chosen artists Kelly has given me a wealth of suggestions of artists’ work who I might find relevant and interesting. Just one example is the inspiration I have gained from the sound works of the late pianist Glen Gould, who uses his command and sense of counterpoint to weave together different sounds, rhythms and voices to explore different communities and their existential conflicts. Discovering Gould’s sound works gave me the key to realising effects I’d been struggling to achieve.

Kelly has also made me much more aware of the fundamental importance that writing and text have in my work – my final pieces are often based on scripts which explore particular ideas using the edited and juxtaposed words of others. She suggested that I apply for a collaborative writing residency. Following two days of workshops together, several of us have developed a continuing practice of sharing between us what we have written in response to a provocation, set each month by a different member of the group.

Kelly asked where I wanted to be by the end of the mentoring process. I wanted to know the strengths and weaknesses of my work and to develop its strengths. I wanted too to be able to present myself confidently as an artist. For me, achieving that has been one of the most significant outcomes of the last eleven months. The Lifeboat residency has fundamentally strengthened my belief in my practice and myself as an artist. Kelly has been an important part of that process, giving me constructive criticism; suggesting potential opportunities and galleries and project spaces I might approach with ideas; and exploring a wide range of aspects of my work such as collaboration and its complexities, interviewing technique, site specificity, the haptic, rhythm, intimacy, and the visual presentation of text. 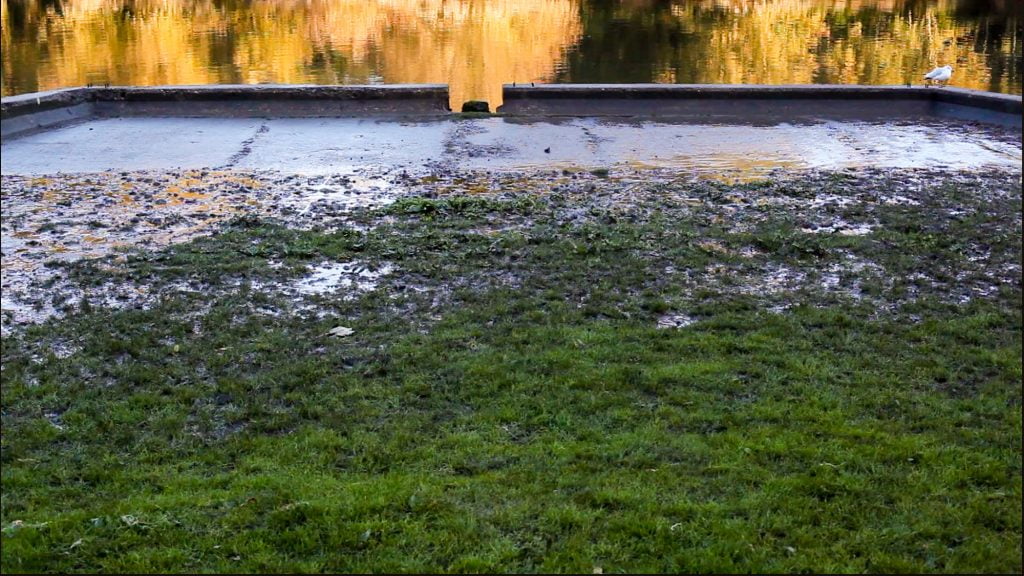 We spent our most recent session action-planning: then Kelly sent me off to think of ten people who I want to approach to have a chat or a coffee with –people with common interests who might form part of a future network; people who have a career path that I would hope to follow, or people who run the sort of participation programmes that might interest me. She has helped me identify and plan to create my own opportunities – to have faith in pursuing my own lines of research, as well as, or as an alternative to, applying for residencies. She has encouraged me to use my current project as a basis to write applications for workshops and speculative applications for funding, which she will then look over for me.

Our mentoring sessions – and the self-reflection they demand – have supported me both in my practice and in how I position my work. They’ve been a very enjoyable, as well as effective, combination of structured exercises and informal discussion. Kelly’s background – as an artist, curator and academic – and her constructively critical approach – has helped me enormously in developing my work and the confidence to get it out in to the world to be seen, heard and – I hope – to stimulate reflection.

Sabrina Fuller was one of the recipients of the 2018 Lifeboat Residency. Lifeboat is a year-long studio residency and peer mentoring and career development award for MA postgraduates from University of the Arts London.  The other artists selected for the 2018 award are Davide Meneghello, Mētra Saberovaand Jojo Taylor. The residency is funded by ArtsTemps and supported by ACAVA.