Brigitte Mierau of the 2014 LIFE BOAT programme talks about maintaining momentum after university.

“If you want to be an artist, don’t expect to be able to relax and take it easy after your degree show.  What you do immediately after leaving art college is very important.  Your first year can set the foundation for the years to come”.  This was the advice given during professional development week in my third year at Camberwell College.  It made my heart sink, because I was exhausted and longed to take at least part of the summer off.   But it made sense to hang on in there, because there are plenty of opportunities on offer to “new” and ‘emerging’ artists.   The problem is that with thousands of artists graduating every year, the lifespan of “new” and “emerging” is getting ever shorter.   However much I wanted a break, I had to keep the momentum from the run-up to the degree show going, continue to make work and be on the lookout for opportunities.

Money, or rather the lack of it, was a problem.    My hope was to find a residency that would enable me to not only realise a project idea which came out of my dissertation, but that would also support me financially.   As luck would have it, the Mead Foundation were offering a £10,000 fellowship for one year.  The proposal took two weeks to write.  It didn’t get accepted.  But, I still believed in my idea and wasn’t going to let a good proposal go to waste.  So I started looking around for other types of funding and eventually found my spiritual and mental home with the SHM Foundation.  They loved my idea and are supporting me with office space, as well as financially and academically.  I’ve never seen so many mega-brained people in one place.  It can be quite intimidating.  I’m glad that they’re also very kind!

I was still in need of a studio.  I also wanted to be with other artists.   Again luck was on my side: LIFEBOAT were inviting proposals for their Vyner Street Studio residency and career support programme.  Spending more time on writing a decent proposal paid off.  I’m still pinching myself to make sure I’m not dreaming:  the LIFEBOAT programme really is a fantastic once in a lifetime opportunity.

My point is: I think it’s really important to keep going after college and to keep on the look-out for opportunities.  It probably helped me that I had an idea and rough outline of what I wanted to do, so I knew what to go for.   There are more opportunities out there than are possible to deal with.  The sheer volume can be confusing and overwhelming.   And because we tend to feel under pressure, we often go after things just because they’re there, rather than because they resonate with us.  It’s important to have some kind of filtering process to find those opportunities that appear to be mutually suitable.   And then to put in the best effort possible!  Resilience is also very important.   I think, rejection is probably the norm in this game.   It’s best to get used to that as soon as possible.

Our first mentoring session at the end of January was a big eye-opener for me.  As part of our professional development, we can invite three professionals to our studio.  Our mentor, lovely Louisa Martin, had asked us in advance to come up with some names of people we would like to speak to and we suggested a number of artists.  Louisa pointed out the obvious:  WE ARE THE ARTISTS NOW!  We don’t need to have more artists’ talks or tutorials. We have each other to hold crits etc.  What we need is professional development and to think more strategically.  We are now mulling over which curators, galleries or art writers to invite.

We will also have to arrange our first studio crit.  One of our problems is that the four of us work different hours and days.  And yet I find being with the others is a huge asset of sharing a studio.   Every time we speak to each other I learn so much!  We do have a LIFEBOAT facebook group, so we’ll have to arrange a day and time using face book.

In the mentoring session, we also discussed various problems that artist can face in general.   Themes like life, time, money, inspiration etc.  For me, one of my biggest problems is fear of not being able to come up with the goods.  I tend to put myself under a lot of pressure to achieve something.  And this can be hindering to the creative process. Fear can also be exhausting and lead to procrastination.  (I’ve become shit-hot at playing Sudoku!)  Which in turn leads to more fear.  And so it goes on and on. 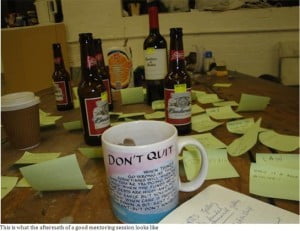 The importance of networking was also talked about.  I always avoided networking, because it strikes me as false and a bit creepy. I don’t like the idea of hanging out with people because they might be useful to me.  I wouldn’t want anyone to use me in that way, so why would I do it to others?  But now I see it in a different light: how can I find my kindred spirits if I don’t go out there and look for them?  They can’t come and look for me because they don’t know I exist.  Yet!  And so, I’m going to go on a quest to find “my people”.  I’ll start by visiting those galleries that take part in First Thursdays in East London and going to openings.  It was pointed out that this was a cheap way to go out with mates for a drink. Which is just as well because I don’t think I can summon up the nerve to do it on my own!

LIFE BOAT will keep us afloat until October.  Time is running out fast. Louisa suggested we need to start building our own “ship”.  Our idea is to aim high and build an ambitious ship: we would love to put on an interim show at Camberwell Space.  Watch this space…