Glasgow: how to find sanctuary in the dear green place

As artists many of us are introverted beasts who choose the right time to make the most of creativity. It’s about getting a balance that fits with a responsibility to good practice, your wellbeing and the desire for fruitful community involvement.

People forget Glasgow is relatively provincial, surrounded by the UK’s efforts at wilderness. To this day it lives up to its etymology – being old Cumric for ‘dear green place’. As with other industry metropolises, the city has grown to encompass districts beyond its centre. It is in these places where well-pitched artistic communities take occupancy.

Recently my practice has slowed due to seeking sustainable income. This is often seen as problematic, or idle, especially in a city like Glasgow that displays itself as booming in terms of hard work and output. It can be overwhelming as validation is given post-evidence of production.

But over the years Glasgow has bred an inquisitive and community-centric outlook for me. If you are creative with how to get yourself about, the city can be a sanctuary for reciprocity and collaboration.

I am going to take you on a journey to visit some of these sanctuaries, spanning a few districts.

For a time I lived in Govanhill south of the River Clyde. With established studios and galleries set amongst long-standing migrant communities, I found getting involved with Mount Florida Studios (MFS) a little further south east, a productive move for seclusion. This small pebble-dashed building is where our journey starts.

MFS is run by designer Catherine Johnston and the studio community represents a wide range of creative practice; filmmaking, iron mongering, sign painting, curating. A gallery sits at its heart and fire for the heart bellows in a pizza oven out back.

Transparent in running shop, they charge for use of the gallery to covers costs. As well as being a good destination for seeing, meeting and showing artwork, the space is also a way to put back into the community. If you show there, you support the space and its people.

Queens Park Railway Club might have something on! A gallery that replaces the station’s waiting room who chose the word ‘club’ wisely. Borrow some knowledge from its established producers, they have been active in the city’s artist-run ecology for years.

Head out of the station onto Victoria Road and look across the widened street up to the tenements. During Glasgow Open House festival 2017 this was called the ‘block’. Enter Monster Chetwynd’s flat for performances in darkened interiors. Step foot into other flats, find yourself in bedrooms; witness an artist play with an amp under the duvet.

There is something about going to an artist’s flat to bathe in intimate experience. Glasgow has this perfected and there is one consistency: Gallery Celine. Also situated in ‘block’, they live up on the lofty top floor and programme events and curious exhibitions – a mix of local artists and invited practitioners from other cities. Their hospitality is warming, more pleasant than standing in an operation-room-like commercial gallery feeling like the artwork under social scrutiny.

Now we’re taking a walk to a walled garden, it will take around 40 minutes, we can talk along the way. 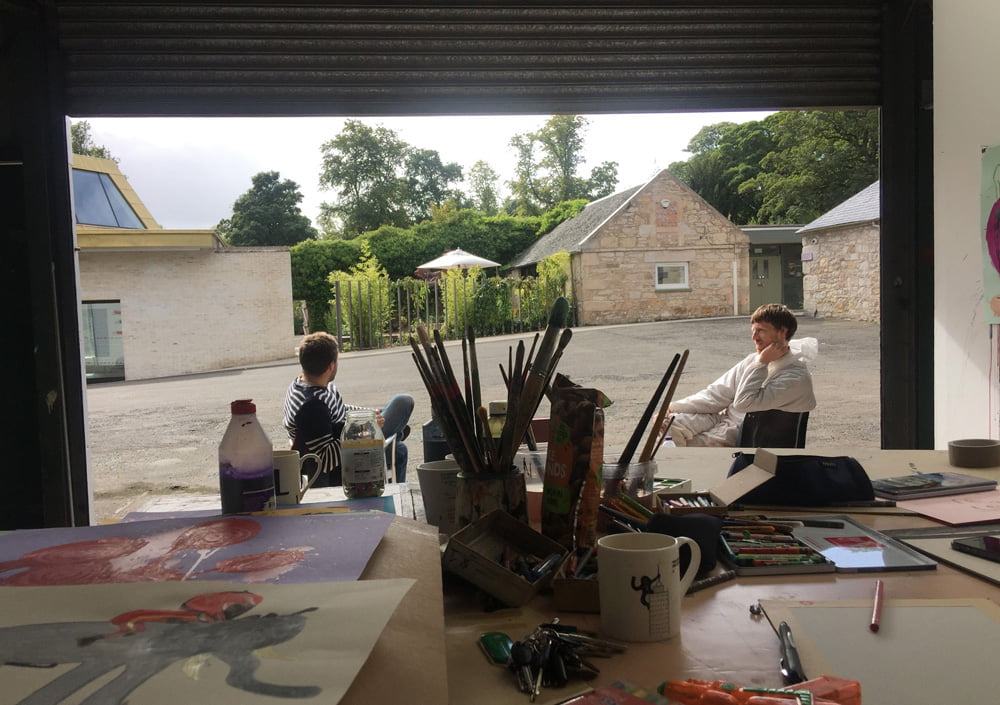 Still in the city’s ‘Southside’, near Ibrox Stadium, is Bellahouston Park with Macintosh’s House for an Art Lover. Adjoining its architectural majesty is Studio Pavilion, a set of work-spaces, galleries and a bothy. With its education programme and opportunities for local artists to take residence and show work; this is also a destination for visitor repose. Take stock, talk productively, forget you are in a city, don’t feel idle.

Now for some sound just north of the river. A bi-monthly event in the heart of the city is Lights Out Listening Group (LOLG). It takes place at The Old Hairdressers, a bar I first set foot in to see Alasdair Gray read during Glasgow International 2010. 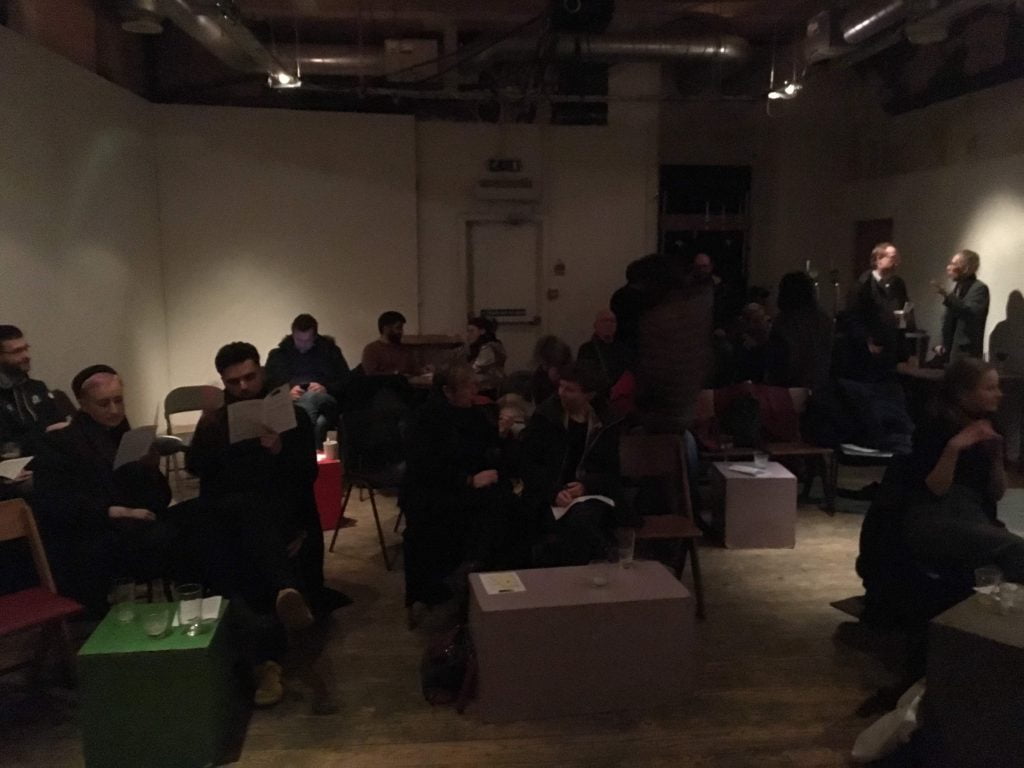 LOLG is less packed and the atmosphere is contemplative. A sense of community is their goal, for artists working in sound and spoken word to show and chat knowledgeably afterwards. LOLG’s execution allows downtime. You get to blow out candles, for an hour of pure listening in the dark. It is here I discovered you can feel productive from ‘within’ listening, to create an alliance with each presented work.

Glasgow is famous for Transmission and this is just down the road so let’s go. As an offspring of a constitutional model taken from setups in Edinburgh three decades ago, their legacy is also a lesson. I worked in their archive in 2010 and could see historically how governmental change, and low incomes, were no good mix for sustaining voluntary labour. Still active they provide an essential resource as a community, and for hiring equipment.

A similar artist-run setup is Market Gallery in the east end (we’re on the train again). They occupy small shop fronts in Dennistoun and have sustained their presence in tune with the local community; programming and offering residencies to configure discussion around the future of artist-run models. 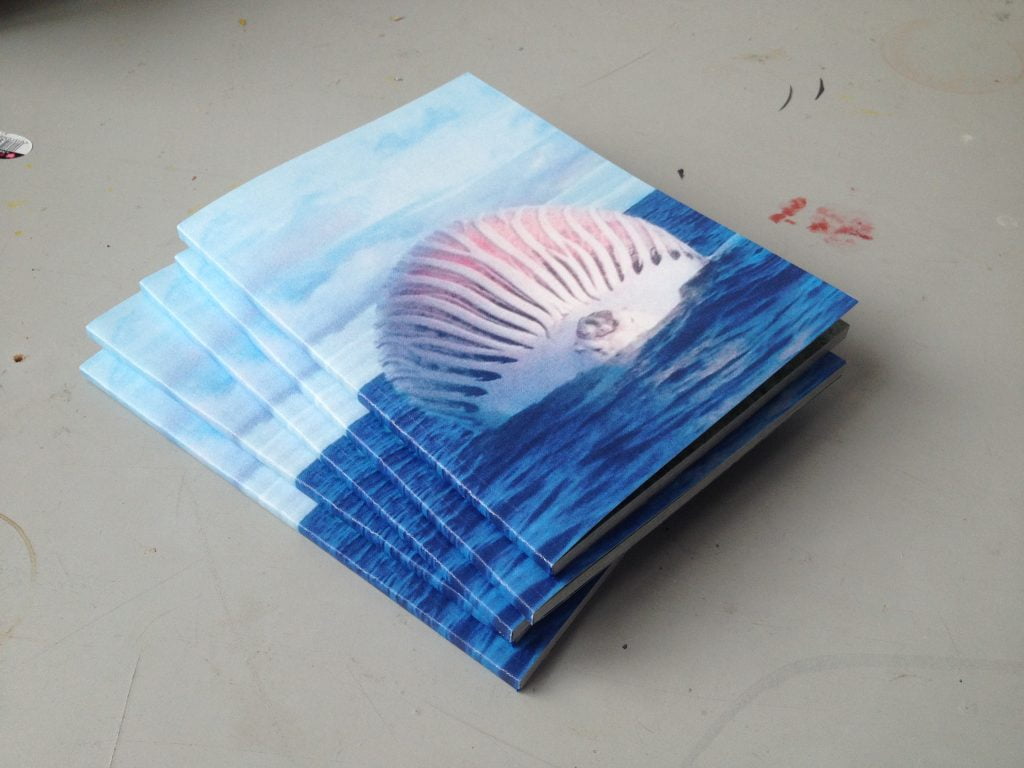 The committee are diverse in their programming and take a sustainable approach to maintaining inclusivity. One committee member leads on a project with support from others, meaning collected sets of events and shows are produced allowing people from different backgrounds, working in varied trajectories, to get their voice heard.

Glasgow International (GI) is a prominent opportunity to put a lot of art seeing in your tote bag. It covers a range of areas in the city, pulling together hubs of activity. By encouraging exhibitors to organise openings and events simultaneously, a community feel is reached with a chance to see a lot in a short space of time. Its international outlook is particularly inspired by Glasgow’s – or even Scotland’s – global cultural agenda. Like many other ‘I’m not calling myself a biennale’ festivals in the UK: it attracts international audiences to momentarily enrich the voices of local artists who show work. 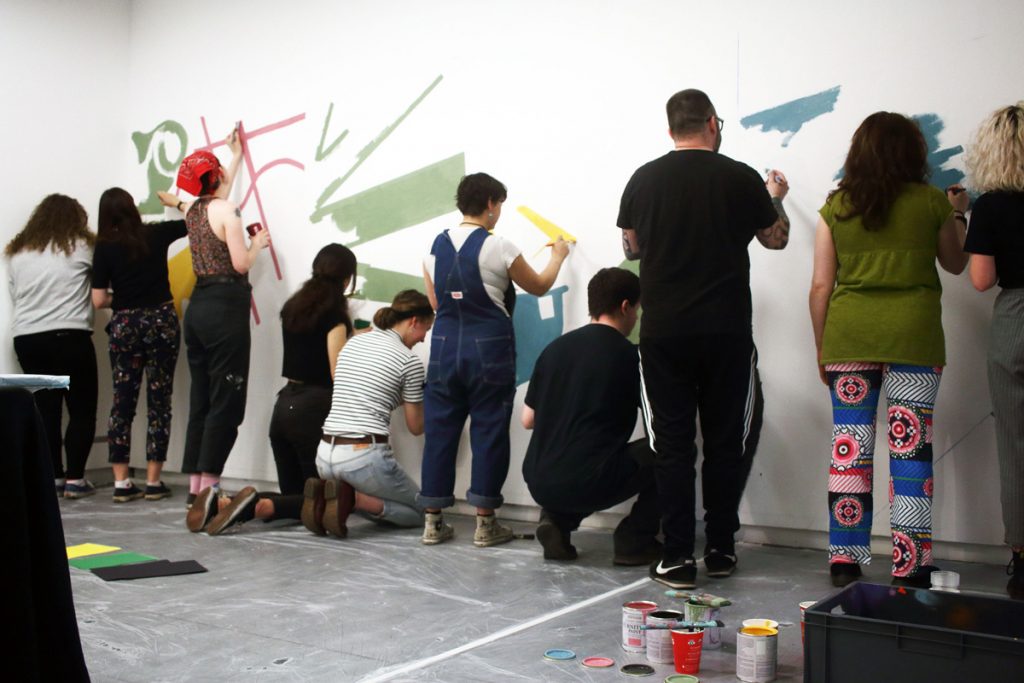 GI’s monumental programming has led to the conjuring of other international festivals and events. A notable addition since 2014 is Glasgow Zine Fest, led by a team dedicated to accessibility the annual festival brings in DIY book-makers, independent publishers and zine enthusiasts from across the globe, for a weekend of events, workshops, networking and selling. More recently Glasgow Zine Library, headed by Lauren (LD) Davies, has rooted the festival’s outlook in the city, creating a community that comes with slices of criticality, openness and learning within processes of production and distribution of work.

Glasgow is a city that basks in its provincial glory and through this it can be inclusive and borderless. For us introverted beasts, its ‘island-like’ existence (a phrase nicked from a recent HSBC advert in my local train station) also harbours multiplicity for sanctuary, where production can ebb and flow depending on circumstance.

Throughout its history, especially since being European Capital of Culture in 1990, inhabitants of the city have expected culture. Art here is embedded in seams that stitch together multiple communities active within districts throughout; where ‘production’ is first queried, then appraised and valued. There actually doesn’t always have to be output, just feeling involved can be enough to get yourself back to the making stage.

Richard Taylor is an artist and writer living in Glasgow, UK. He was born in Sheffield (1985) into a paternal dynasty of hairdressers and a maternal family who owe their prosperity to the city’s steel industry. He is currently working in collaboration with Alex Hetherington on a 16mm film project that combines writing and voiceover with analogue film techniques. Richard also works in editing and online content management, and has written for a-n News, This Is Tomorrow, The Skinny, Modern Edinburgh Film School and National Galleries of Scotland. From 2013 to 2015 he was co-editor of the artist-led pamphlet series Gnommero. He is currently co-director and assistant editor for the Glasgow-based independent publisher Hedera Felix CIC.
0

Following on from our successful WFH Residency, Adaptations is an award for the next step. It will support visual artists seeking innovative authentic ways to adapt their practice for an age of physic… Continue Reading Adaptations