In Spring 2019 we arrived in London after 6 years of living in Portugal. We had initially moved away from the UK when we had an opportunity to live rent free in a beach house in a small town south of Porto. At the time, this was exactly what we had been looking for, a chance to live in a beautiful place, grow our own food and dedicate every waking moment to making art, without having to worry about the costs and other pressures of life in the UK. Our time there was invaluable, it allowed us to go on a deep exploration of our creativity and to experiment with all manner of media, forms and approaches to our work. By the time we returned to the UK, we had transformed from the people we were when we left, over those years we had learnt so much about the creative process and imagination, we had created a significant body of work and had found the direction we wanted our art to take.

Both the downside and the upside of our time in Portugal was the same: the isolation. This was good because it enabled us to focus intensely on creative exploration, but it also meant that we were rarely able to connect with other artists, which for us has always been essential. Portugal has quite a lot of cultural activities going on in the cities but less so in the smaller towns, and maybe because of this we never managed to find a scene of other artists who we truly connected with and who shared our particular interests in moving image. At a certain point it became clear that the majority of artists whose work we felt an affinity with were based in the UK; and so, as we had also reached a point in our creative work where it was time for a change, we took the leap, packed up our things and made the move to London. 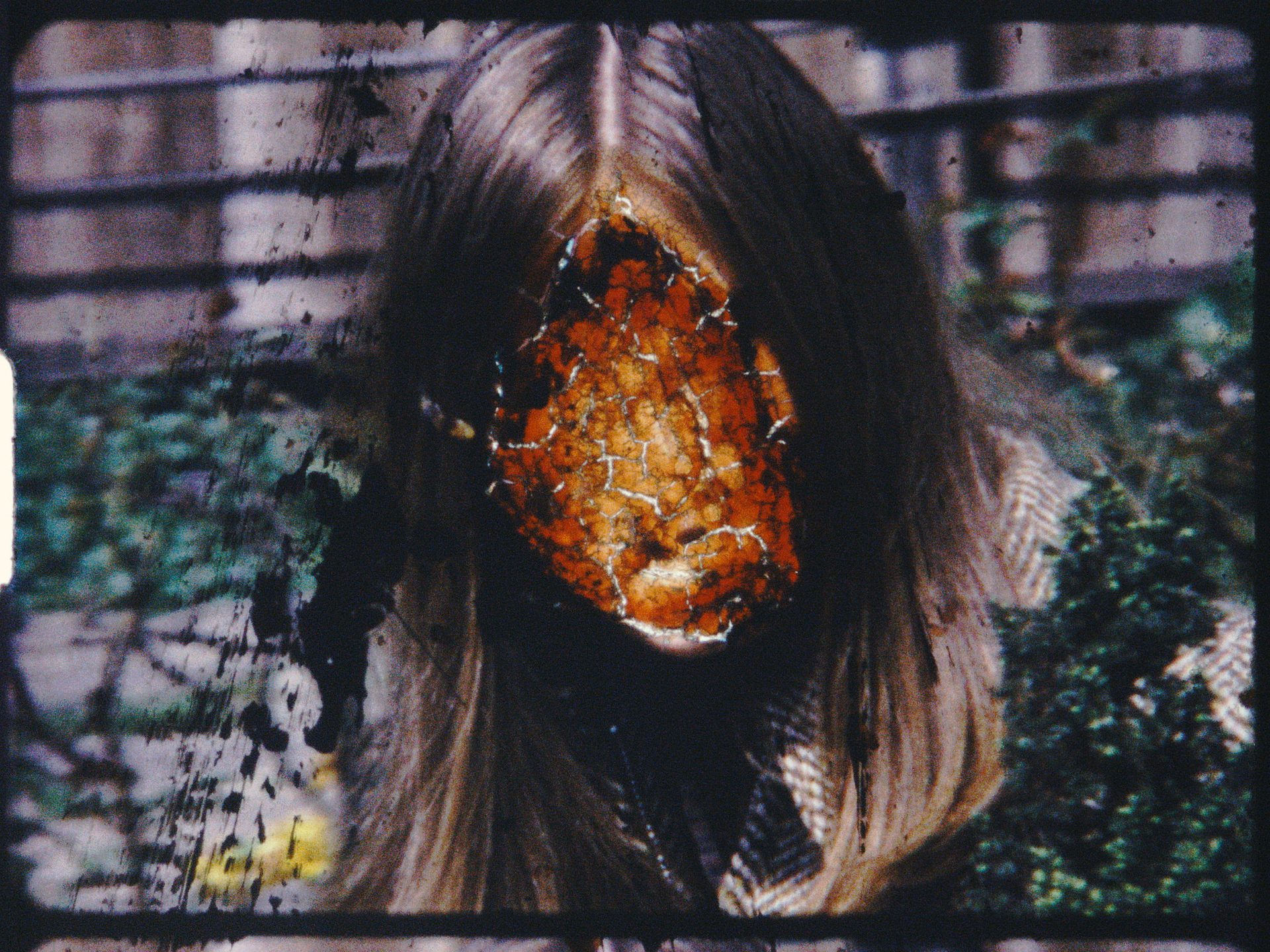 This Should Hurt A Little Bit, Autojektor

Before moving we spent a bit of time researching what was available in terms of groups and networks for moving image artists and experimental filmmakers. Even though London is rich with amazing exhibitions and organisations dedicated to moving image, we didn’t quite find what we were looking for – which was a place where artists working with all types of moving image art could come together, share ideas, screen work, meet and collaborate. We had expected, and hoped,  there would be something like the artist-run groups of the 1970s and ’80s that we could join but after realising that nothing like this existed, we decided to create it ourselves. 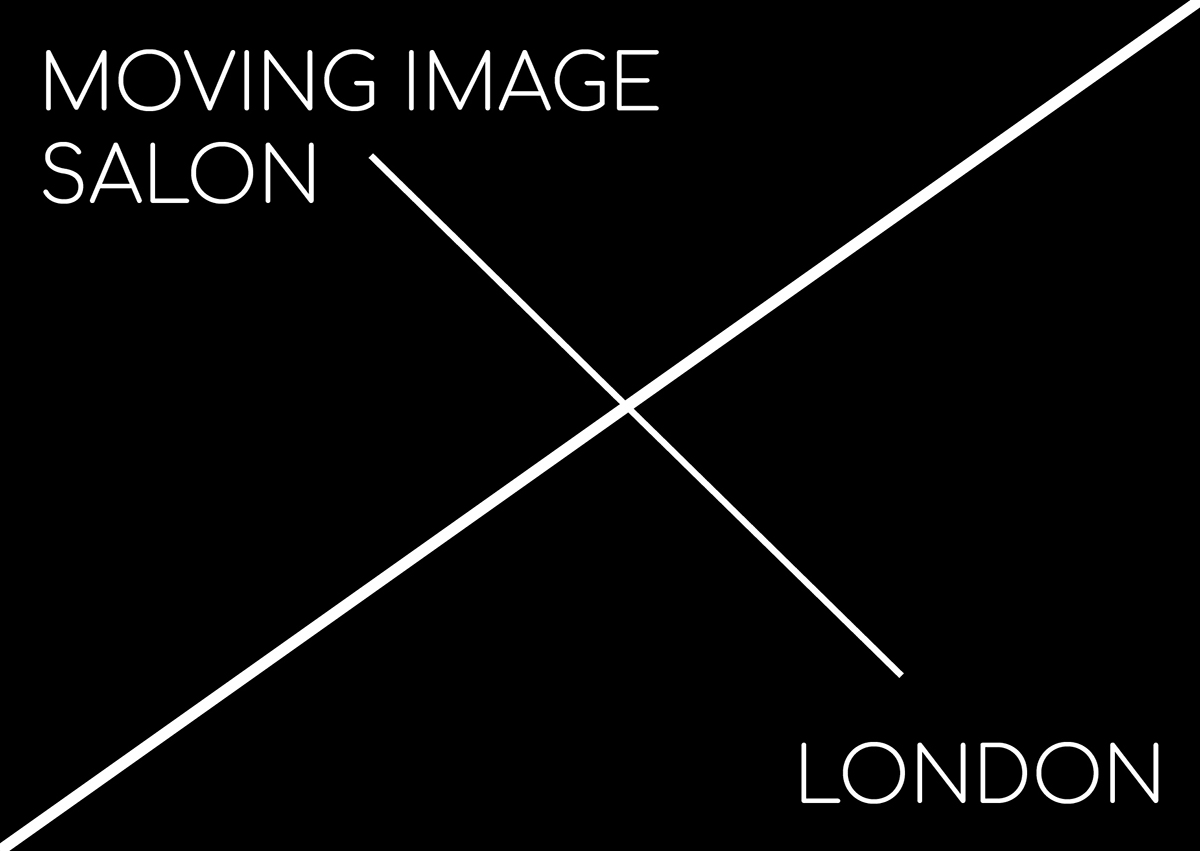 The Moving Image Salon is a regular gathering, free to attend and open to any artist working with any form of moving image and experimental filmmaking. It is a relaxed space for artists to connect, share their work and discuss contemporary practices. Usually we meet once a month on a Friday afternoon, in the back room generously made available to us by Film and Video Umbrella.

The sessions are divided into two halves. In the first half, we invite a featured guest to present their work and engage in discussion about their practice. We invite them to share whatever they’d like, whether it’s a new or old work, or even works in progress – our focus in these discussions is to hear about what interests them and what drives their work, to go deep into their creative processes and how they see their work in relation to wider contexts.

The second half is dedicated to an open platform where any attendee can share a short film, excerpt or talk about a project – there are no fixed rules other than it needs to be less than 10 mins so we have time to speak with each artist about what they present.

Everyone who shares their work is treated equally no matter what stage they are in their practice, whether they are showing their first film or they have been making work for many years. We approach every film as if it is exactly how it was intended to be, we do not see our role as experts making judgements but as curious students seeking to learn. The conversations are always open and everyone takes part, asking questions whenever they feel compelled to do so. 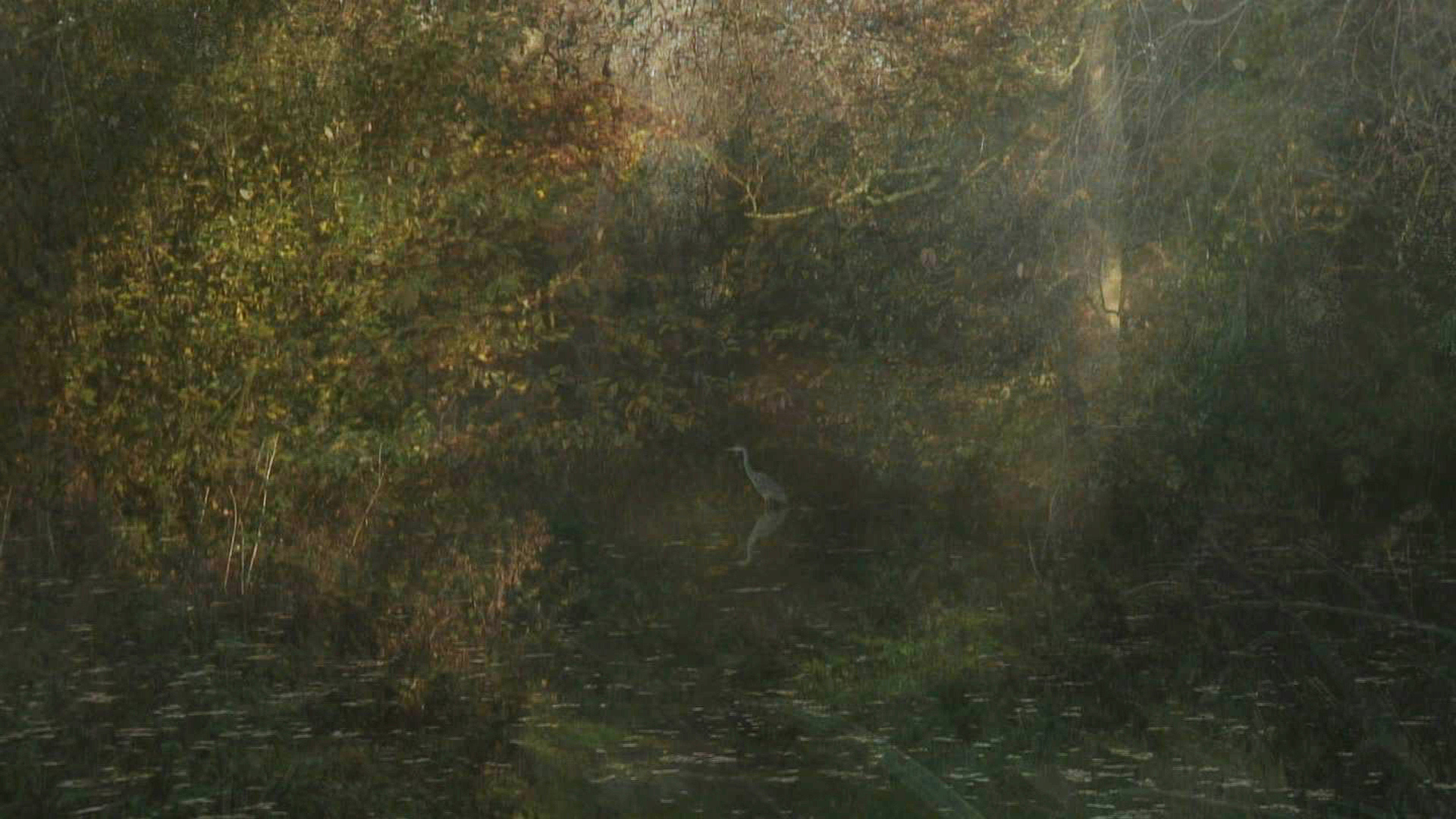 The discussions always focus on the creative process, exploring the form, themes and ideas that emerge from the work. We never talk about funding, careers or opportunities, somehow these topics never really come up, and we are happy for this because there are many organisations out there who can provide more informed advice about this than us. But what we can offer, and what the Moving Image Salon provides, is a space for creative exchange and community, for discussing the intricacies of each person’s creative journey, how they go about the process of bringing their ideas to life. We see it as an open peer-group, where artists can support each other’s activities by simply paying attention, listening and responding. This might seem a very modest ambition but we have seen how effective it can be, how already friendships, collaborations and projects have emerged from the connections made there.

In many of our decisions about the Salon we have been inspired by other artist-run groups from the past such as the London and New York Filmmaker’s Co-ops, in which artists came together and organised in non-hierarchical ways in order to create the infrastructure needed for their work to exist. In the past, this was especially important in terms of accessing equipment and learning the technical skills to create work outside of commercial and industrial frameworks, but as equipment and skill-learning became increasingly accessible and affordable due to digital technology, the need for these groups seems to have faded. In our view, the real importance of these groups was in creating a space where artistic work and exploration were valued, and where vibrant and untamed discussion could happen – in other words, a community within which artists could incubate their work, be encouraged or incensed by each other, but nevertheless strengthened and emboldened by their mutual dedication to creative work. 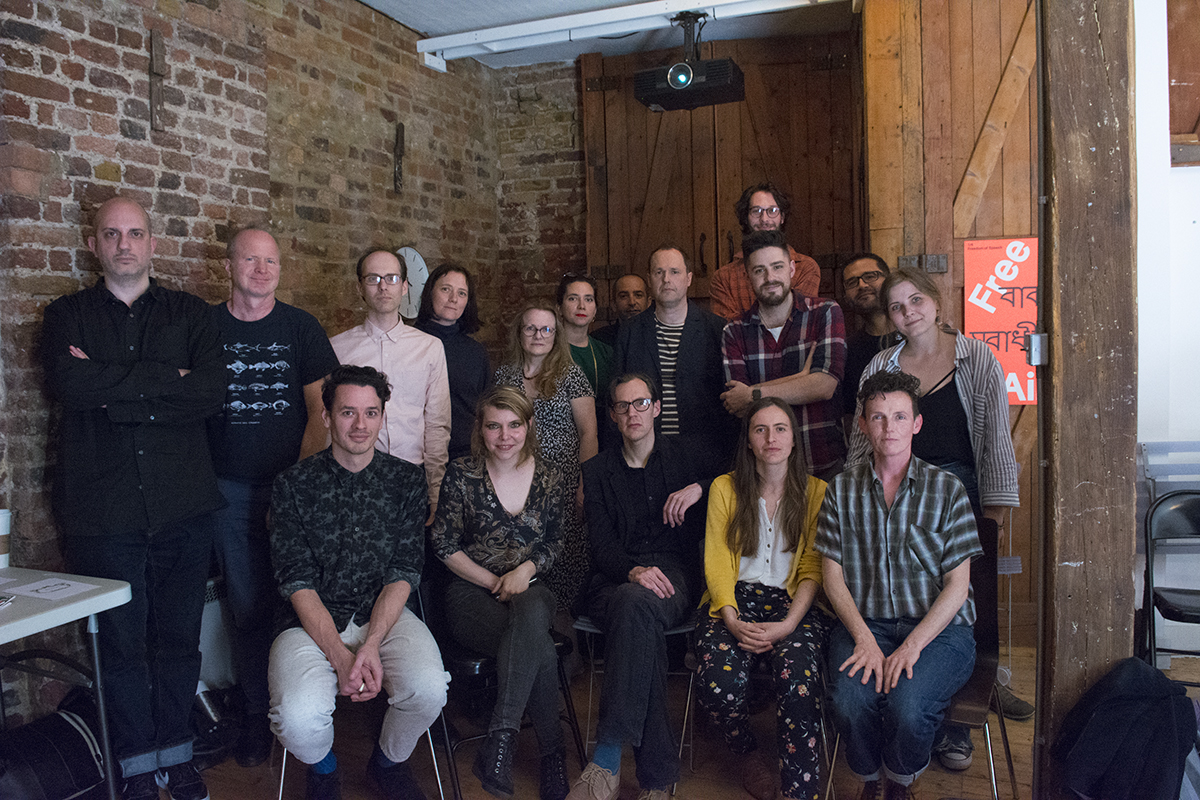 It might seem that nowadays, with the prevalence of social media, that it is easier than ever for artists to find peer support online. There are countless benefits of the internet as a tool for connection, but in our experience it cannot replace what happens in real world exchange nor the energy that comes from conversations that take place within a physical space. Equally, it is very different to experience moving image projected in a dark room with a group of people and the artists present, rather than watching works alone at home on a computer screen. Art is essentially a sensory, visceral experience, and the exchanges between artists take place on that level as well, it is not merely intellectually or with words that we communicate and respond to each other’s work. For these reasons we felt it was essential to create a space like the Moving Image Salon.

Everyone, including ourselves, is always surprised by the quality of the work shown in the open platform  – we never watch the work beforehand, the artists bring it with them on a USB drive and we see it for the first time with the group. With such an open platform one would expect to see a real mix in quality but this has not been the case. Some people attend a few sessions before sharing something, others have shown different works over different sessions, but, perhaps encouraged by the opportunity, everyone shares what they are most passionate about, the work that truly means something to them, and this in turn seems to result in quality. The approaches are hugely varied, there is no one style or theme covered but in each session a synchronistic magic is always at play and links between the works always emerge.

Thinking back over the first year of the Moving Image Salon there are a few moments that stand out in our memory. The first Salon remains significant: we launched with our dear friend Toby Tatum as featured guest, with his mysterious and beautiful landscape films he cast a spell over the group and no doubt this magic helped set the tone for what was ahead. We were delighted when Geri Snell shared an expanded-cinema piece in which everyone simultaneously watched a video on their phones, the slightly out of synch sound creating a chaotic immersive experience. Karel Doing joined us for our last session in February, setting up his 16mm projector to show his plant-based phytographic films. Autojektor, one of the regular attendees, is an artist who creates handworked 8mm films and many sessions have ended with her rapid-fire films blasting chaotically and briefly into the room as a visceral finale. 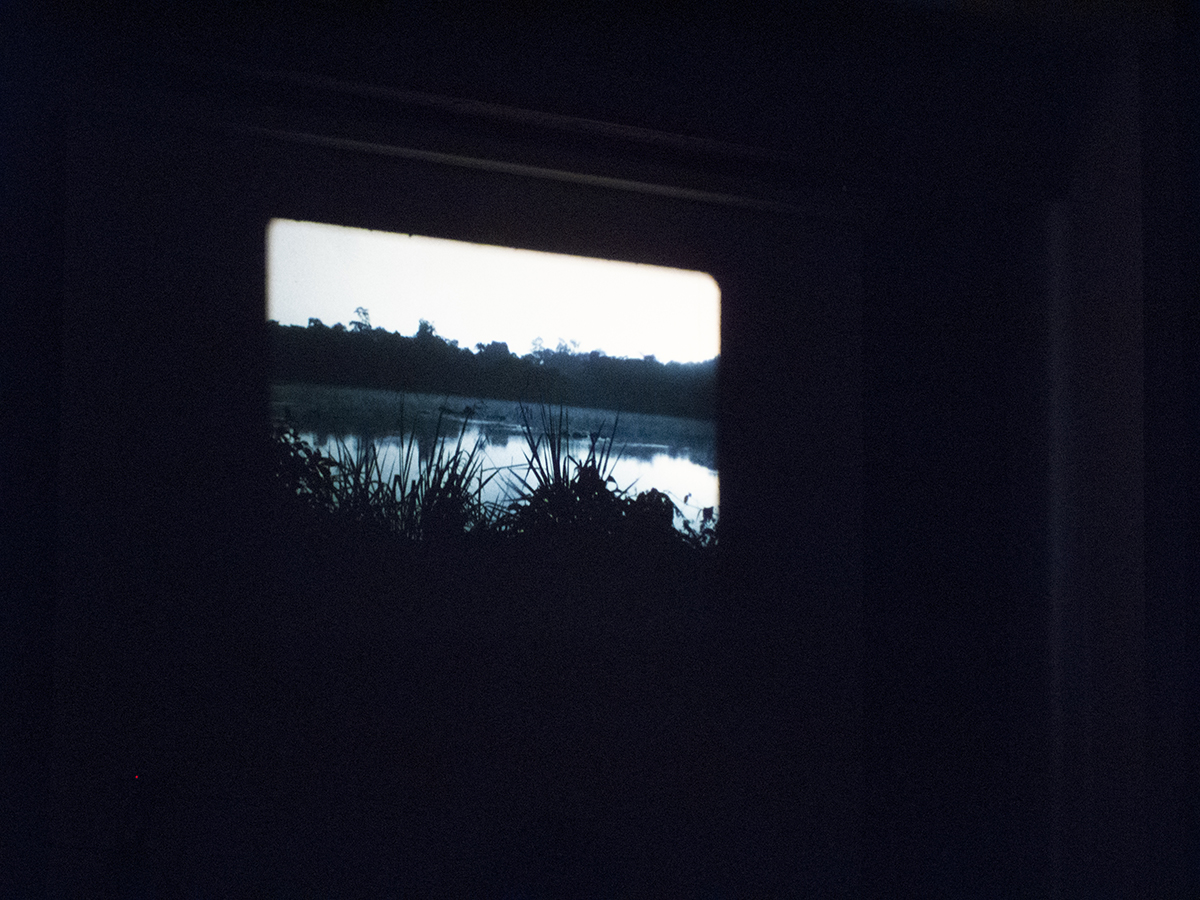 The end of each Moving Image Salon has a wonderful ritual to it. We open the doors and let the air and light in, everyone blinks and takes a deep breath after 3 hours of films and passionate discussion. We stack the chairs and tidy the room, and from that first session we were surprised how everyone helped with this. When this happened we knew that we had achieved one of our aims, to create a space that belonged to everyone. We then end by asking one of the FVU team to take a group photo, as a way to document the artists who took part in each session. We pose like in a family photo, for ourselves, for each other and for the future – in the same way that we can learn about previous groups through the pictures and artefacts they’ve left behind.

The last Moving Image Salon took place in February 2020, the March session was planned but then cancelled due to the pandemic. We write this now from a different world, it’s August 2020 and we’ve spent the last 5 months in isolation on an island in the Blackwater estuary on the Essex coast. During the first few weeks of lockdown many arts organisations rushed to create online content, film festivals created online editions and artists unlocked their films and made them available for free. We understood this reaction but we decided to wait, we couldn’t at first see how the Salon could work online. What makes the Salon so special is the energy of being in the room with other people, it’s the magic of projecting the films in the dark and then speaking together – a mood is conjured, a real connection that is specific to that place, that moment. Currently it seems unlikely it will be safe to resume these gatherings until the new year, we’ve had a lot of requests to do online sessions but we wanted to make sure we could do it right before going ahead. We have a challenge on our hands, we cannot compensate for what is missing but we can attempt something different, we can still keep the spark of community alive. So this September we are launching our first online Moving Image Salon, through zoom we’ll gather and experiment with how we can adapt, connect and keep creating until the time is right to gather again.

Daniel & Clara, two humans one artist on a journey exploring dimensions real and imagined, the results of which consist of moving image, photography, installation, letters and performance. Alongside their own practice they run Moving Image Artists (MIA), an organisation dedicated to supporting and cultivating contemporary moving image art and experimental film.

An annual research residency from Artquest in partnership with Conway Hall Humanist Library and Archives This slideshow requires JavaScript. This project is temporarily suspended due to ongoing restri… Continue Reading Conway Hall Residency