Programmes ending or continuing through 2014 included:

One-off projects taking place during 2014 were:

A series of talks that looked at the practical, political and philosophical considerations of an artists career, and how other responsibilities and a career can be balanced. Over forty talks took place as part of The Real World, and all were audio recorded to form resources on this website. Audio is collected here, and is embedded across the site.

Discussion series at Camden Arts Centre exploring where practice and the practicalities of an artists life intersect, sustain and compete with each other. How do work, family, money and life blur with the core activities that artists do during their working lives?

A series of interviews with five galleries from around England that give insight into the different ways in which exhibition spaces can operate. Galleries play a key role in the careers of artists, but for many reaching them appears a remote goal. Understanding how a gallery works and its priorities are the first steps in building a relationship with a space. This series of interviews interrogates 5 different models of gallery operation, identifying the commonalities and the differences in how they work and interact with artists, audiences and their contexts. Produced by Orlagh Woods and filmed and edited by Donald Bousted.

The Value of Money

A literature review into the motivations and value that artists ascribe to money in their careers.

Professional visual artists operate in a complex and little-understood economic context, often considered similar to that of small businesses. In reality, policy makers and funders struggle to fit artists within received economic models that rarely match their wider social status, how money circulates through the art world, the specific operation of reputation, and the value given to different forms of income that obtain in the different financial and non-financial markets in which artists operate.

This research build on our 2009 research: The Funding and Finance needs of Artists (PDF), as well as peers across the sector and internationally. Download The value of money: professional visual artists decisions around income (PDF).

A book of anonymous essays in which artists, curators, educators and other arts professionals expressed their views on the art world with complete freedom 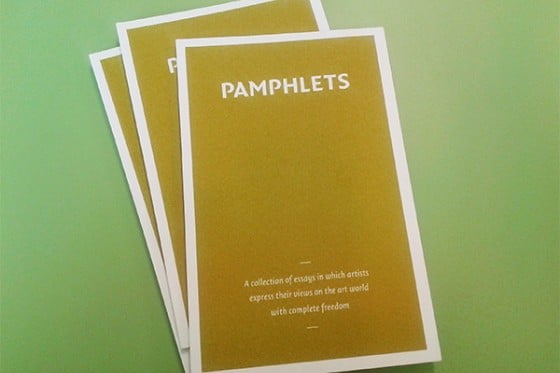 With an open brief to write one essay about something close to their own practice, and another about the wider structure of the art world, Pamphlets provides a snapshot of opinion – sometimes incendiary, always forthright – from those working at the coal face. Inspired by the polemic 17th century political pamphlets of the British Civil War, Pamphlets is an opportunity to find out what artists think about the context they work in, and aims to encourage debate. Originally an edition of 500 copies; now these have sold out, we publish the articles online.

As well as an introduction and afterword, which contextualise and describe the project, the articles are:

A series of interviews with, and talks by, artists around the breadth their diverse careers, many of which became advice articles on the Artquest website. Prior to Channel Q, Self Assembly (2009-2013) showcased the different paths artists take to sustain their practice while still paying the bills. Self Assembly sought to lift the lid on how artists actually manage their time and money, balance the demands of work and life, and still get round to making work. The full list of over 150 interviews and recordings from all our talks and events is on SoundCloud.

The New Economy of Art: book and debates

A book on value, patronage and emerging business models in contemporary visual art, co-published by Artquest and DACS and launched at a special reception at the Houses of Parliament.

Building on the panel discussions of the same name in 2011, The New Economy of Art, brought together a range of perspectives on the current economic infrastructure supporting the visual arts in the UK, its impact on individual artists and their capacity to make art. Collectively, the contributors expose the paradox of the UK’s art economy and ultimately, its fragility; where an unregulated art market grows at a rapid rate while individual artists’ capacity to make art is threatened by a vulnerable and precarious income.

To deepen discussion around the issues it raised, Artquest and DACS organised a series of three debates (two recorded) from December 2014 to April 2015.

A partnership with Camden Arts Centre, a peer mentoring session inviting artists and arts professionals to discuss their practice with artists.

Whenever artists needs help or advice their first option is usually to ask their peers: this is why networks are so vital, since fellow artists can share experiences of their working life, from the practicalities of realising work, recommending suppliers, making introductions to curators and giving critical feedback that helps work develop. Three sessions were held that built on our research of how peer mentoring networks work, and our previous Forum programme. Evaluation and learning from these sources led to our revitalised Peer Forum programme. Sessions, each recorded and available below, included conversations on self-representation (Rosalind Davies), writing about your work (Colin Perry), and alternatives to art school education for artists (Open School East).

A series of workshops facilitated by AND Publishing for Open School East associate artists to develop a ‘reader’ for alternative MA programmes. Artquest supported a series of 3 workshops, where OSE Associates worked with AND publishing to develop a reader that reflected on their time at Open School East and the models of learning experienced there. The reader is available for download (3.8MB, PDF).

Our final residency held in Berlin, with other editions in 2007, 08, 09, 10 and 11. <<3 months in Berlin>> was an opportunity for a London-based visual arts or crafts practitioner at any stage of their career to live and make new work in Berlin, and provided a free live / work studio for 3 months, return air fare, a bursary and materials budget. Organised in partnership with ACAVA and hosted by Milchhof art group. Each artist produced three articles about their experiences for the Artquest website.

A three-month international residency for an artist to be hosted at M4Gastatelier artist-led studios in Amsterdam. The award included a bursary of £1,200; return airfare; a free live/work studio space for 3 months and funding towards a public-facing event about their work and experiences on their return. Selected artists were asked to produce three articles about their experiences for our website: updates on work produced, galleries visited, or a general overview of life in Amsterdam for artists.

In a series of two interviews, Castagner spoke with Anika Schwarzlose about Chukotka Projects, gentrification, funding and the art world in Amsterdam. She also spoke with Jeffrey Babcock, cultural activist and alternative cinema programmer in Amsterdam, about the historical and cultural context of alternative initiatives in the city. She also present A View from the Analysts Couch, a performance lecture that explored the pressures, expectations and rewards of an international residency.

A research residency run in partnership with The Arts Catalyst: artist Alistair McClymont was resident at the Central Laser Facility to engage with the work undertaken there and develop his practice. The end of this residency was marked by a talk, Making a Universe, in which McClymont shared his thoughts and research.

Funded by Arts and Humanities Research Council (AHRC) as part of their Cultural Value Programme, this seminar aimed to address the cultural value and legacy of experimental and transitory arts practices. It was led by Orlagh Woods, David Cotterrell and Helen Sloan. Focusing much of its preliminary research on the short-lived Arts Lab, which operated in Covent Garden from 1967-69, the project considered an organisation which is periodically cited as a prime-mover in the avant-garde of London in the late 1960s, but for which there is currently scant evidence that can express its value in relation to past, present or future cultural ventures. Artquest supported an invitation-only closing event to discuss notions of cultural value and Arts Lab and celebrate the end of the first phase of research.

What is an internship?