Squaring the Circle, funded by Arts and Humanities Research Council (AHRC), aimed to address the cultural value and legacy of experimental and transitory arts practices. 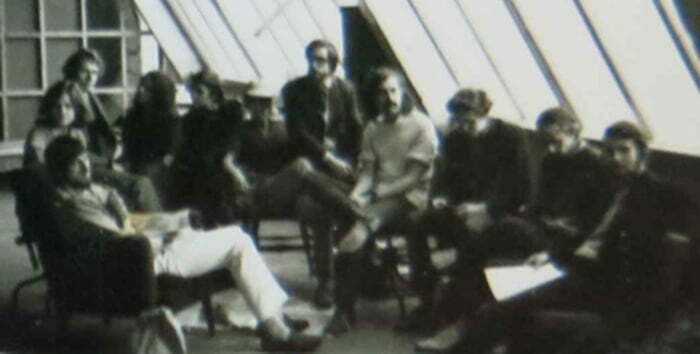 Focusing much of its preliminary research on the short-lived Arts Lab, which operated in Covent Garden from 1967-69, the project considered an organisation which is periodically cited as a prime-mover in the avant-garde of London in the late 1960s, but for which there is currently scant evidence that can express its value in relation to past, present or future cultural ventures.

Working in the spirit of the Arts Lab, the project sought out multiple voices from different periods and backgrounds to offer up evidence for measuring the value of experimental art practices. The project’s structure was iterative: from desk research that led to interviews with original Arts Lab organisers, which fed directly in to the structure of cultural probes that informed the data delivered to critical responders who presented to an invited peer group at the closing symposium, the research team responded to the data it was presented with through the life of the project, adapting subsequent stages to take into account emerging findings.

Mapping and collectively exploring the impact of Arts Lab through its organisers, participants, audiences and those who consider themselves inheritors of the organisation’s legacy, the research sought to articulate and expose the plurality of narratives involved in this endeavour and the linked organisations and individuals it reveals. Investigating the allocation of value within the more experimental, ephemeral and experiential arts has been historically difficult and this project aimed to introduce new methods for the dissemination of such practices, starting with a case study based in the 1960s, which continues to hold relevance in the present.

Squaring the Circle was funded by the Arts and Humanities Research Council (AHRC) as part of their Cultural Value Programme. It was led by Orlagh Woods, David Cotterrell and Helen Sloan.

Artquest supported an invitation-only closing event to discuss notions of cultural value and Arts Lab and celebrate the end of the first phase of research. Presentations, discussion and activities will explore the research and look at the role of experimental arts spaces and practices within the arts and culture today. Findings will feed into a larger AHRC project about cultural value, with future planned publication.

Working as an artist’s assistant

Soraya Rodriguez and Doug Fishbone: the education problem, or, how art schools could encourage more diverse ways to be an artist

Mark Gubb and Angela Kennedy: the money problem, or, how artists could be paid more than £10,000 a year

Kirsty Ogg ­and Marijke Steedman: the gallery problem, or, what artists can do when their work doesn’t fit in galleries