Reykjavík: designing with tradition and modernity

Bobby caught our attention after we came across a number of his album artwork designs making reference to the Icelandic landscape; moody shots of lava fields, coastal scenes overlaid with weather symbols and mineral-splattered green hills.

Working with musicians has been a natural development in Bobby’s career, a result of the high population of musicians in the country. We meet Bobby Breidholt in downtown Reykjavík to talk about his graphic design work, a connection to nature that simultaneously spurs him on and switches him off, and the increasing influence of Hip-Hop and nineties culture on his visual language.

One of Bobby’s clients is Uniimog, an Icelandic band who invited him to create artwork for their album Yfir Hafið – translated as Over the Sea – where Bobby had free rein to delve into the possibilities of nature as a subject matter. Over the top of coastal shots, taken by photographer Jónatan Grétarsson, he created and layered a number of nautical signage designs. To the layman’s eye they look like simplistic shapes or lettering, possibly Viking symbols if you knew the Icelandic context. “They are all markings from ships,” explains Bobby, clearing up my curiosity. “Like depth markings on ships, but absolutely, it looks like some kind of runes and I was really aware of that. It was kind of industrial and organic at the same time.

The strong references to nature, to wide open landscapes and with a nod to mysticism and spirituality, thread through a lot of the album imagery Bobby has created. “I think growing up in Iceland you can’t avoid that whole aspect. We’re a really modern society but everybody has it in them I think…I’m definitely into going out into nature and feeling the forces,” he explains. “I can really get lost in that. I think a lot of Icelanders can. Some people wouldn’t admit to it, you know, it’s a bit of a cliché now – the Icelandic elves and the glacial landscapes,” he says in a movie voiceover tone. “I think there’s a fear of, not necessarily a backlash, but it’s definitely swinging the other way. There was a lot of acoustic music and guys with beards with their acoustic guitars in some hut near a beach and that was Icelandic music. But now there’s a whole feminist wave going on and a lot of rap and electronic music. I think it’s normal that it swings that way and probably in ten or fifteen years we’ll swing the other way again. But I really think there is an Icelandic vibe to everything, even if there are no nature shots. We’re so isolated and we have such, like a soul or something, our visual language is distinctive.”

In recent years Bobby has noticed a big surge in creatives coming into graphic design as an artistic outlet, rather than as a commercial career possibility.

“I’ve been working in advertising and freelancing for ten years and I’ve seen it go from a time when people would graduate from the Icelandic Academy of the Arts in graphic design and just talk about what agency they were going to work for. It was always a commercially driven thing. Now it’s more about graphic design as expression. Everybody wants to have a studio and not go out and make ads for a bank or something. People now want to go out and create awesome stuff, and with the internet and social media it’s more possible than ever. People are collaborating, people can go out and create a sweatshirt and do the graphics, they can make scenes for photoshoots and stuff like that, so there’s a lot of self-expression going on. I think it’s really exciting. You can be a studio, even if it’s just yourself at home.”

Although this shift in graphic design allows for more creative freedom and self-initiated projects, I wonder if this new perspective is financially sustainable in Iceland.

“It’s such a small country that it is really hard, but I mean you can survive on almost nothing, like bits of freelance design I guess. Right now we’re experiencing a huge boom in the economy and I think most people I know also have a regular job, and I think they have jobs so they can have the freedom to create whatever they want.” Local artists are willing to work an evening job or pick up part-time work in order to have control and flexibility over what they make. Bobby is excited about the possibilities on the horizon for creatives in Reykjavík, he excitedly continues, “If you come back in a year or two I think the design scene will be a lot different!”

Collaboration appears to be a commonality within the creative community that Bobby is a part of. “It used to be the tortured genius at home alone, but now it’s more like one big party, like, let’s create something awesome!” he says. “You no longer have to get so and so Mr Photographer, we’re being more resourceful about what we have”. Bobby continues to work in advertising for his day job and has witnessed recent changes in the way clients are starting to view designers in Reykjavík, as a result of the evolving working dynamics of designers.

“I can really feel that design studios are taking a lot of work away from advertising agencies. Companies are looking for more creative solutions. I think a lot of the industry is starting to be attracted to the little studios and collectives for sure…Your timing coming here I think is great because the scene is really changing right now. We’re moving more towards influences and graphic design that has nothing to do with Iceland at all. We’re moving into some new conceptual area, something more original. If there are references I would say it’s the late nineties or the millennium. Have you heard the term web brutalism?” he asks, enthusiastically. “It’s basically just ugly stuff. A lot of websites these days, made by Icelandic designers, are like this – there’s no easy user interface, it’s really bold and there’s background gradients from the nineties and funny cursors, blinking graphics and flashing sirens. That’s really exciting. Really low-fi, bold and ugly”.

Not one to be left behind Bobby is currently collaborating with his girlfriend Greta and their friend Kinnat on a studio called Smart Babes, where they have already started applying the difficult to use, early-internet design on their website: www.smartbab.es. Their user interface sensibilities go against the slick, simple and clean website designs that saturates the online space.

The rejection of traditional Icelandic references, such as the rich saga history, whimsical music and tales of elves and magicians, has resulted in the desire to look outside of the country, to cultures and design genres that bare no relevance to the country these designers call home. It has also coincided with a huge influx of tourists to the island. Artists and designers are watching the traditions and natural beauties of their country turned into commodity. Viking models, toy puffins and Icelandic wool knits grace every other store in Reykjavík, as well as the stop-offs at the main tourist spots across the land. Bobby tell us, “We had an advertising campaign called ‘Inspired by Iceland’, with people jumping around in knitted sweaters saying, ‘Come visit the elves!’ – It’s not like that..it isn’t us, you know? We’re not all country folk with hand carved furniture”. Bobby has noticed a few businesses reacting to the overtly and exaggerated Icelandic visual language being used to entice visitors to the country. “There’s a brand new hotel called Otsum, it’s avant-garde, designer, there’s nothing Icelandic about it. It’s a refreshing change. When we ourselves are selling Iceland to other people we end up creating a kitsch version of it”.

The tourism economy has started to put a stress on day to day living too, “We’re becoming the victims of how beautiful we are,” Bobby explains. “There’s a huge tourism boom, which means there’s a huge Airbnb boom, which means the rent and real estate prices are out of control”. Many of his contemporaries have been moving to Berlin as a result, “People want affordable places to live and Berlin is of course really creative and exciting and it offers that. It’s a good time for it, we’re just getting out of a deep recession and now people can afford to leave”. 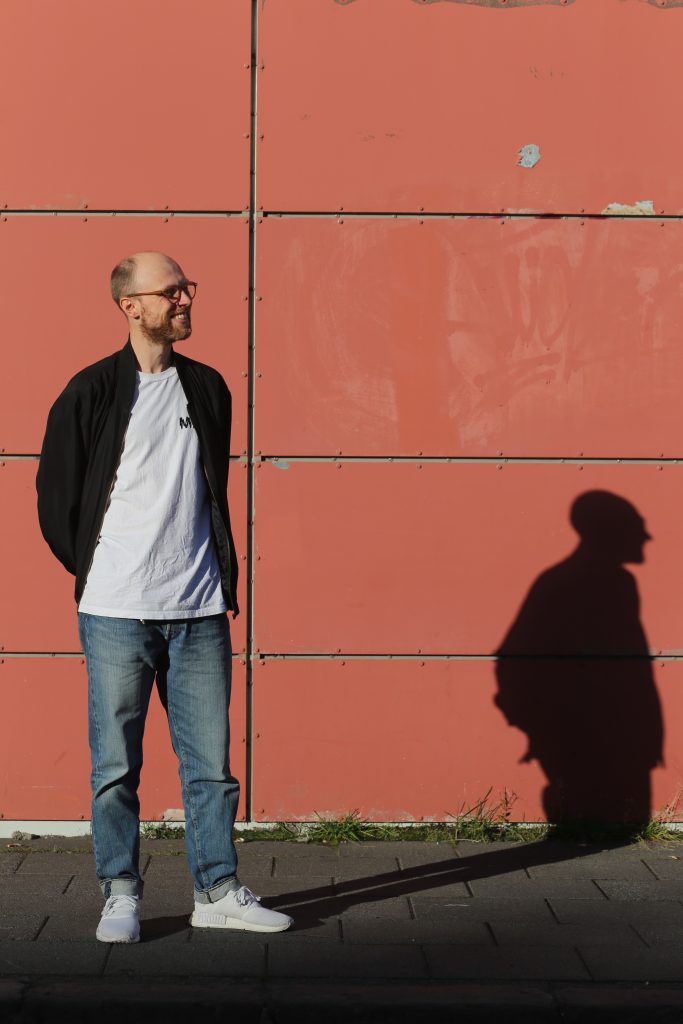 Bobby’s exciting enthusiasm for, and connection to, the offerings of his country’s landscapes integrally influence his expanding graphic design portfolio. Combining images of the island’s natural terrains with borrowed symbology, rooted in Iceland’s cultures and history, from fishing iconography to weather signs, Bobby presents Iceland’s natural landscapes in a contemporary and playful manner that doesn’t steer away from a spiritual and earthy heritage but reframes it, giving it new vigour and energy. He is carrying the visual language of Iceland forward, through a new era of artistic influences, but not forgetting the bounteous characteristics of his homelands.