In 2013 we programmed a major conference and commissioned a new piece of work at the Venice Biennale as well as our ongoing programme of talks, events and web resources.

Programmes ending or continuing through 2013 included:

One-off and major programmes in 2013 were:

A series of six interviews with fine art graduates who have excelled in other roles and industries on the impact of their arts education. Participants included the CEO of a technology research company, a psychotherapist and a priest, who have all gone through an art school education but have shifted career-path later in life for various reasons. Some were artists for a time, while others realised straight away they needed different jobs to make a living. The six films tell their stories, exploring how their art school education has had an influence on the their career and how it had given them a solid backbone to work in a variety of industries and roles. But do they still consider themselves artists? Did they ever stop using their creativity? Films produced by Orlagh Woods, working with film-maker Donald Bousted.

Fringe: Art Party invited seven artists and makers from around the country to live together at the Chalet, a five-bedroom Victorian house behind The Art Party venue. Informal debates and conversations were convened on Friday 22 and Saturday 23 November 2013. Our friends at Crescent Arts, co-hosts and organisers of the Art Party, helped put us in touch with local artists in Scarborough. The conference was covered extensively in national and local press, including on the BBC, Guardian and Telegraph. Artists invited were Ellie Harrison, Patrick Lowry and Jane Lowry of Back Lane West, Calum Crowther, Alexandra Cavaye, David Gates, and Helen Carnac.

For the love of it*

A major one-day conference that explored the assumptions, expectations and myths of working as an artist today. The conference untangled how issues such as education, money, collectivity, status and community impact on an artist’s practice and influence their goals. A day-long event, it looked at how artists control and shape the context they work within, asking whether it is still relevant to say that we do it ‘for the love of it’.

Keynote talks were given by Professor Lynda Morris, Chair of Curation and Art History Norwich University College of the Arts, and the founder and curator of EASTinternational (1990-2009); and artist Sonia Boyce, exhibitor for the British Pavilion at the Venice Biennale in 2020.

Breakout workshops on Value (with artists Amy Feneck and Neil Cummings, and researcher and curator Sophie Hope), Research (with Tom Freshwater, the Contemporary Arts Programme Manager for National Trust, and artist Rona Lee), Success (with artists Doug Fishbone, David Blandy and Edwina fitzPatrick) and Collectivity (with The Institute for the Art and Practice of Dissent at Home) were also held, along with a final artist polemic by artist Ellie Harrison.

Co-curated with Cecilia Wee. Colleagues at Creative Choices and a-n have written articles about the conference.

A social space reserved for visual artists during the Venice Biennale preview days, and a commission by artist Erica Donovan. Organised by Artquest in partnership with Axisweb and Engage, the Pavilion provided a focus on artists – without whom the Biennale would not exist – during the exhibition preview days (29-31 May 2013), shifting the focus from the glitzy parties and billionaire collectors for which it is increasingly known. A talks programme held during the Pavilion commission included contributions from artist collective Blauer Hase, founded in Venice in 2007 by Mario Ciaramitaro, Riccardo Giacconi, Giulia Marzin, Daniele Zoico; Ann Jones, curator of the Arts Council Collection and artist Elpida Hadzi-Vasileva, representing Macedonia at the 2013 Venice Biennale.

What work should I get paid for? 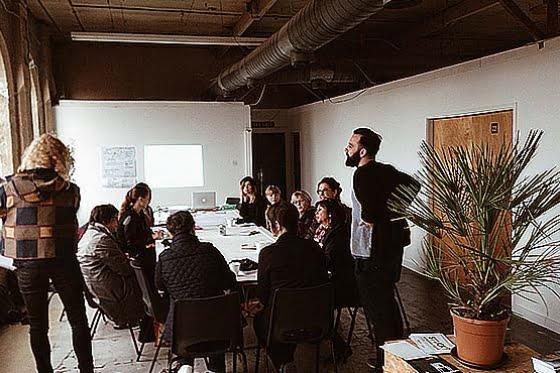