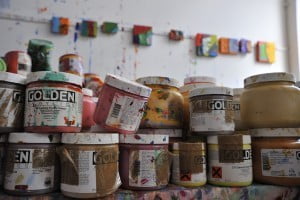 The Artists Fund was a community interest company led by Artquest, DACS and a-n the Artists Information Company to provide small grants to visual artists based in the UK: in England, Scotland, Wales and Northern Ireland. It was wound up in October 2018 and is no longer trading.

Established as part of an Arts Council England Catalyst grant, The Artists Fund undertook a pilot grants and commissions programme to understand the feasibility of microfunding for artists. As artist-centred organisations, we understand that sometimes a small financial barrier is all that stands in the way of an artist’s next critical step in their career. The Artists Fund distributed small but transformative funds to artists, serving as a catalyst to further their work in any way required of, and suitable to, their practice.

Five grants of £1,000 were awarded to: support an artist’s practice in its broadest sense – including and beyond studio practice – in a humble or ambitious way; support projects or interventions that embrace experimentation and focus on process, as well as essentials such as materials, development or fees; encourage new directions or experiments in practice.

As part of the pilot only, three commissions of £2,000 were also awarded. The explicit aim of the commissions was to test the assumptions made in the art world about how artists can raise money using their practice, beyond selling their work, and the viability of how artists might earn in the future. We sought radical ideas to compile into case studies for the development of The Artists Fund and as a challenge to traditional arts funding programmes: adventurous, risk-taking and possibly absurd projects that respond to the economic issues and sustainability that impact on current artistic practice in the UK. As part of their application, commissioned artists had to identify ways in which they would try to double their money in any legal way possible. Artists will keep any money raised during their activity to spend as they wish, and will not be asked for the commission to be returned even if they fail in this aim.

Awardees in the pilot round were:

Robert Fung, graduate of Fine Art & Visual Culture at Bristol University of the West of England, now based in London and a member of School of the Damned.

For The Manufacturing of Consumer Goods in Competition with Advanced Industrialised Economies, Fung will make common consumer items based on the material and labour value created when purchased online. Translating the cost of making mass-market goods via the UK’s minimum wage into the time spent on their manufacture, Fung will produce replica products until the entire £1000 budget had been used up, commenting on the value of labour and craftsmanship in the arts and allowing the creation of a single coherent body of work.

Louise Ashcroft, born in Bradford, West Yorkshire, currently living in London, a graduate of the Ruskin School of Art (Oxford University) and Birkbeck (University of London). She also studied Sculpture at The Royal College of Art and is co-founder of the alternative art school AltMFA.

Ashcroft will create an eclectic body of work including: ‘resources for alternative methods of generating lived experience’ (described as Allan Kaprow meets religious parables, self help books, DIY YouTube videos and Ikea instructions); new live works for festivals that chronicle her subversive attempts to overthrow capitalism; testing a possible project around housework and shopping; and making films with a local football club. With a practice that falls between comedy, real life, storytelling, installation and film, the grant will allow for time to develop new, broad, open and unexpected work.

Naomi Kashiwagi, born in Halifax and now based in Manchester, studied BA Fine Art, receiving an Erasmus Scholarship to The Academy of Fine Arts in Venice. She completed an MA Fine Art at Manchester School of Art (MMU), including a month studying at Tokyo University of Art and Music, and later studied MA Art Gallery and Museum Studies at the University of Manchester

Kashiwagi makes drawings, performances, sound works and installations at the intersections of visual art, music and technology. The grant will develop her collaborative live performance Gramophonica by enabling the purchase of musical hardware, software and materials through laser cutting and the confluence of digital and analogue recording.

Dennis Low is a self-taught artist-photographer informed by ideas and theories from the emerging field of Human-Animal Studies.

Low explores society’s relationship with captive, farm and companion animals, and the problematic nature of human-animal encounter. Low will use the grant to complete a new body of work based on an extended trip to photograph the animals, enclosures, staff and visitors of fifteen British zoos; a mixture of large, established, historically significant zoos, and comparatively modern, less high profile zoos spanning the length and breadth of the country.

Katja Larsson, born in Stockholm, Sweden, and based between Sweden and London, studied at The Glasgow School of Art and The Slade School of Fine Art.

Larsson’s project consists of an expedition to the Isle of Skye to create work from its volcanic rock coastal landscape; an investigation into traditional approaches to landscape via the means of contemporary sculpture. Alluding to the romanticism of Caspar David Friedrich, Ansel Adams and Thomas Joshua Cooper, she will explore historic and traditionally depicted landscapes through the means and limits of her own body.

Tom Pope, born Bristol and living in London, completed a BA in Photography in the Arts at Swansea Metropolitan University, and an MA Photography at The Royal College of Art.

Pope will use the commission to build and launch the most exclusive private members club in the world: a luxurious and unique experience and ultimate exclusivity, the club will have only one member at any given time, of a duration of one day. The membership fee is based on the market price of buying one square metre of land at the clubs location, initially the Royal Borough of Kensington and Chelsea (where one square metre of land currently costs £10,854). Capable of being moved to different cities and boroughs, the differing land values will influence the cost of the membership. Commenting on wealth inequality between London and the rest of the UK, the club also highlights the effects of regeneration and the difficulty of arts organisations being pushed to offer ever more tailored and unique experiences to their benefactors and philanthropists.

Tom James’s work has been featured in the Guardian, the Observer and on BBC Radio 4; his fanzine, Go, is part of the permanent collection of the V&A. He will be creating a new, future-themed folly in the grounds of Compton Verney, Warwickshire with the artist Alex Hartley.

Starting Fires And Catching Rabbits is a continuation of a current project, A Future Manual, a DIY guide to some of the skills needed in the bitter, barren, climate-changed world we’re creating for ourselves. Taking workshops on tour to extend his audience and earn both money and bartered goods as income, his aim is to double the commissions budget through a mixture of pay-what-you-can ticket sales, cans of tinned food, bags of flour, tea, chocolate, batteries, photocopier toner, type-writer ribbon and razor blades. A response to the limbo period humanity is in, in which we know climate change is coming, but do not co-ordinate efforts to prevent it, the workshops aim to be half useful and half useless, half hopeful and half hopeless, half funny, half sad.

Working with artist and radical fishmonger Sam Curtis, Morgan will run public workshops across London based on the old Japanese printing technique of Gyotaku (fish rubbing). Workshops will explore making as an ecological process and an opportunity for knowledge exchange that brings together printmakers, squid, fishmongers, chefs, fish heads and zoologists, with participants learning the skills and materials involved in fish rubbing, the method of preparing an octopus, and creating their own prints made from edible squid ink. Commission funds will be doubled by selling tickets for the workshops, and provide necessary start-up costs, experience and contacts to develop further workshops as a sustainable practice and source of ongoing income.

All applications for both commissions and grants were selected ‘blind’ – with contact names, addresses and regional locations removed from copies of the form before being provided to shortlisting artists.

91 commission applications were received for three commissions, shortlisted, and selected on Tuesday 24 May 2016.

Commission shortlisting and selection was done by:

384 grant applications were received for five grants, shortlisted and selected on Friday 27 May 2016.

Grant shortlisting and selection was done by artists:

Why is The Artists Fund not running any more?

A number of challenges and barriers in the arts funding world – from attaining charitable status, the nature of UK philanthropic giving, a highly competitive fundraising environment, and balancing light-touch, artist-friendly  application processes with financial responsibility – have so far made The Artists Fund difficult to establish.

How did The Artists Fund begin?

The Artists Fund was the brainchild of a group of three artist-centred organisations: a-n, a membership organisation representing 19,000 practitioners and freelancers across the visual arts; Artquest, an advice organisation based at University of the Arts, London, which helps visual artists in every area of their career; and DACS, a not-for-profit visual arts rights management organisation that represents nearly 80,000 artists and estates worldwide.

This consortium secured funding from Arts Council England’s Catalyst programme to develop The Artists Fund as a challenge to the current order of public funding and question the fundraising capacity of artist membership and network organisations.

The Artists Fund was a community interest company (CIC), an independent organisation regulated by the CIC Regulator, a unit of Companies House. In a CIC, assets held by the company are ‘locked’, and can only be used for the good of the community; there are limits on dividends and payments to shareholders to make sure the primary focus is on the community.