I imagined life with a newborn as baby and me waltzing around Liverpool going to private views and exhibitions. Of course, the world was different when I found out I was pregnant in October 2019.

I knew that it was important to be able to continue my art practice after having my daughter, B. I have predominately featured in my personal work since 2009, and with common themes of anxiety, hiding & revealing, self-confidence, self-esteem and body image, my art is very therapeutic for me. If I am not able to make work frequently, I get quite stressed and it can really affect my mood. 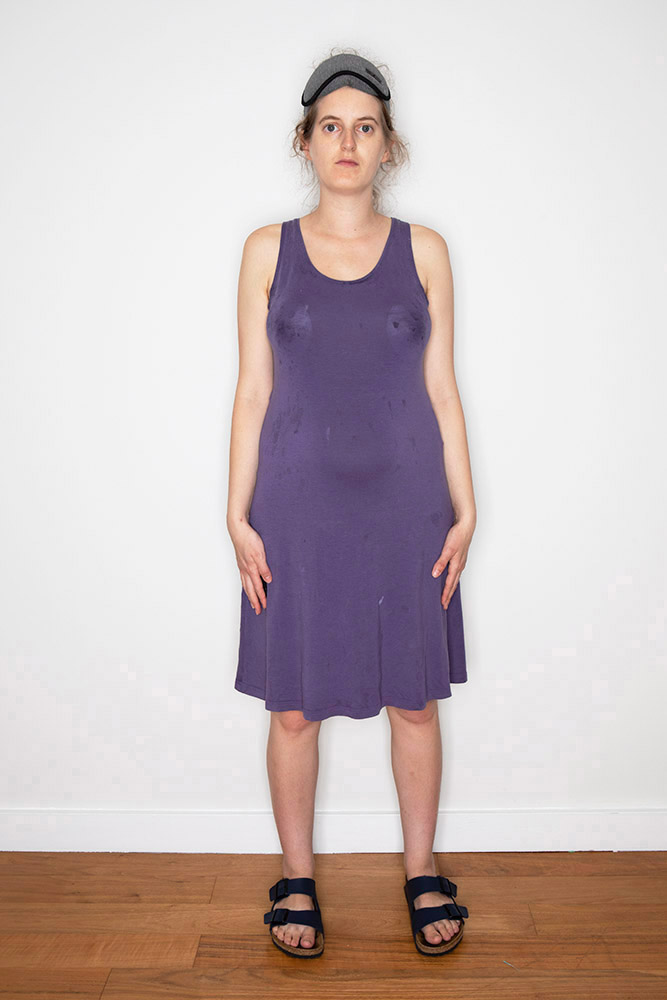 This need to make work for my own sanity means that I am still productive, though the way in which I work has changed. The changes are due to having B, and not the pandemic, as I have continued to make work at home, as I have done for many years.

I like to think that I was organised before having a baby but becoming a mother has definitely honed some life skills. My husband has a regular weekday 9-5ish job, so I am B’s primary caregiver.  At the moment I am taking a break from non-art work, but I still mainly only get some free time when B is asleep and I never know when she will wake up. I must be smart with my time and I have to move fast; my days of procrastination are gone.

I aim to do two shoots a week for my project about early motherhood Oh Me, Oh Mãe; Mãe is mother in Portuguese and B is British-Portuguese. Before or after every shoot I write a text of up to thirty sentences in hashtag form that make up a diary entry, and then I expand on the hashtags on my blog, Jockey Greys. I decided to set up the blog not long after giving birth in June 2020 in a sleep-deprived haze of confidence. There are times that I have told myself off for giving myself extra work as my stubbornness means I will continue to write posts for probably at least a few more years to come whether anyone reads it or not. 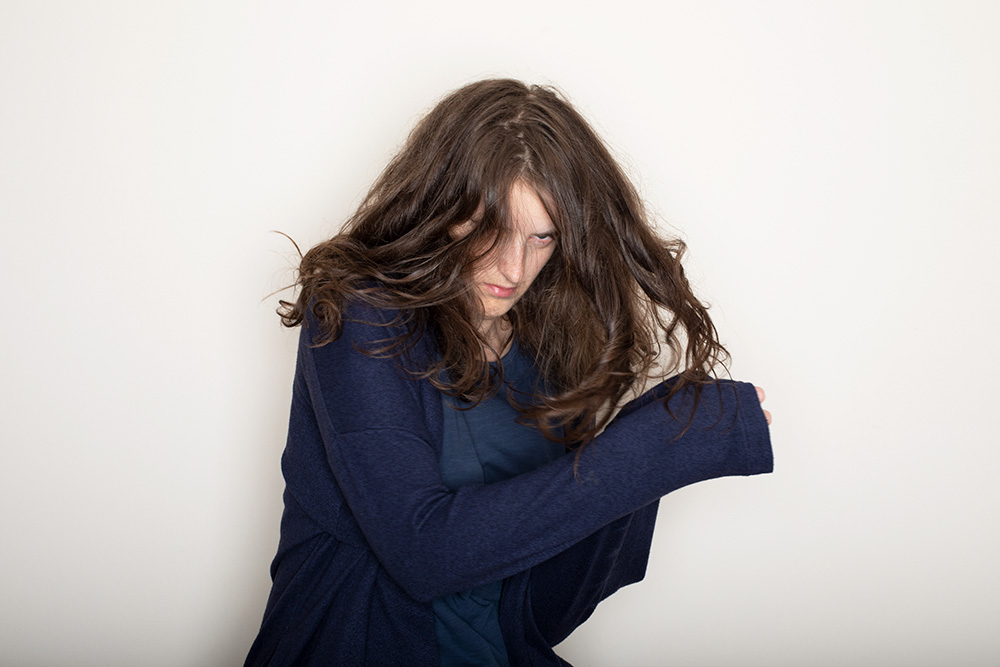 The shoots go between being quite diaristic (me crying due to feeling like a terrible mother), to family portraits (with B’s face covered in some creative way as I think I should wait until she is old enough to decide if she wants to be identifiable within my work), to me imitating B (which is a lot more fun than photographing her doing something like trying to eat her toes). The work is a way for me to process my thoughts and feelings about motherhood and life in general. Sometimes what I write is quite negative, but I feel better for having made some work even if the subject matter is at times awkward to share. I am also less precious about how the images are made too; there are some phone photographs in the project.

I usually publish two blog posts a week, though I do not post them in real time to allow myself time to choose the photograph/s to accompany my writing. I feel like my editing skills improved greatly during my pregnancy project, Waiting For Things In A Time When You Rarely Wait For Things, as I was doing at least two shoots a week and realised that I needed to get more efficient at selecting final images.

Once a week I also try to make some dance videos for my series Your Dedication Worries Me A Little, which I started in 2013. I share them on my YouTube channel and I even made five the day before I gave birth. B is six months old, but up until she was around three months old, she did appear in some as she would sleep while I danced. Now she is older and more active, I think she would just keep looking at my computer and show her face, so now I usually make them while she naps in her cot. 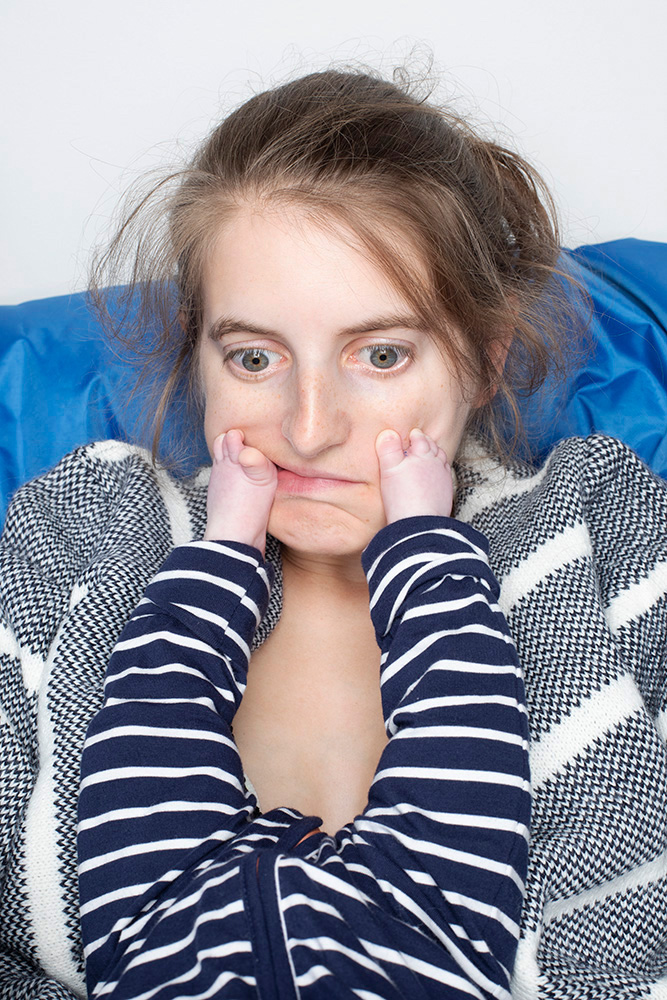 As before there is always a lot of art admin to take care of, like posting to social media, updating my website, and replying to emails. I have been pleasantly surprised to have been asked to do two talks and a workshop in the last couple of months. With presentations I always try to start working on them as early as possible, as I feel like I never know how things might be closer to the time.

By October 2020, we felt like we had to leave Liverpool. Not being able to visit my family as often as we used to was frustrating, and with my husband mostly working from home we decided to relocate to Birmingham and move in with my Nan. Now due to recent rule changes regarding households with under one-year-olds, my Mum is also allowed to visit which she does a few times a week. This means that we do have some extra support, though I usually use family babysitting services to batch cook meals and quickly get chores done. 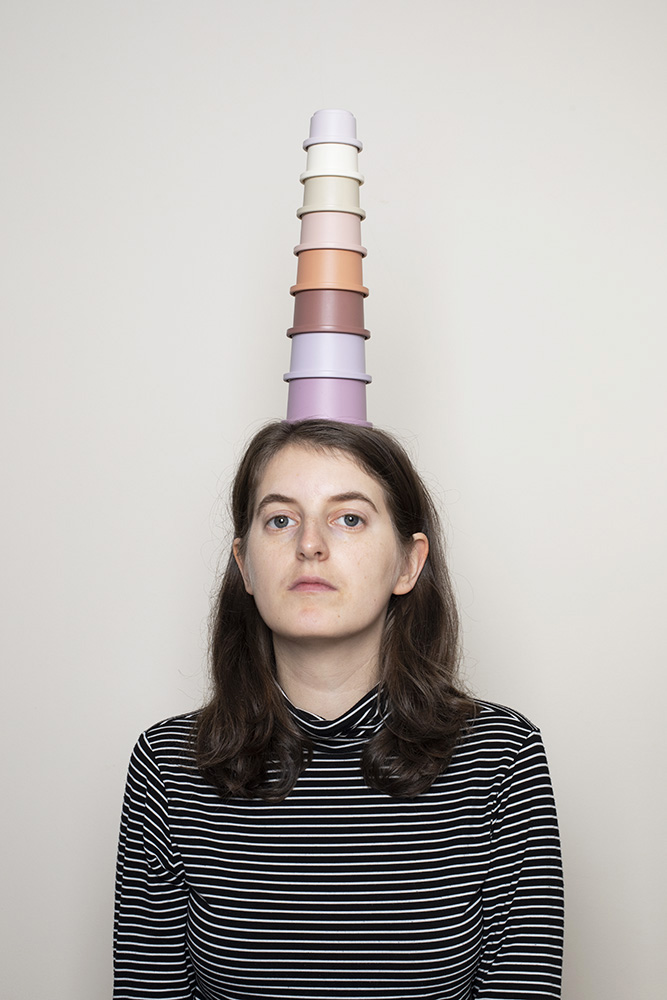 Jocelyn Allen I Have Started To Balance Things On My Head For B’s Amusement (30th December 2020) from the series Oh Me, Oh Mãe

I feel bad leaving B to do my own work unless she is with her Dad. I have to prioritise what I want to do, and I am less interested in things like competitions due to having less time and money; I would rather be making new work unless it is something that I feel like my work really fits. We think about sending B to nursery, but I feel like we can not justify it if I would be using that time to make work that will probably never sell.

I realise that I am privileged to be able to keep creating, and I hope to keep a good life balance as B gets older. It is important to me that I am able to continue making work and retain some of my previous identity as I am more than just a mother. I do worry about how motherhood might affect my future career prospects, but B inspires me, and I hope that she will say the same about me one day too.

Jocelyn Allen is an artist who mainly works with photography, video, dance and performance. Text/hashtags are also becoming more important within her work.

Allen completed her first self-portraiture project in 2010 and primarily features within her personal work. The themes that she often explores are hiding & revealing, body image, self-esteem, self-confidence and anxiety, though recently her work has been about pregnancy and motherhood too.

She currently lives in Birmingham, UK.