Over the past two months, I’ve been in touch with seven Berlin-based artists, asking them about their experiences as artists in the city and how they understand queerness in relation to their work. Common themes emerged: the importance of community, challenges they face, intersectionality, and strategies for reaching their desired audience. I asked why artists and queers have flocked to Berlin. They cited history, hedonism, wildness.

One compelling aspect of the conversations was each artist’s perspective on the idea of “queer art” and how it plays out in their work and in Berlin. Why has Berlin become a site where so many queer-identifying artists make their work? 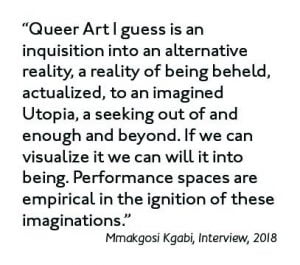 Mmakgosi Kgabi works in performance, choosing the title “storyteller” to describe her vocation. She’s been living in Berlin since 2015, and has found a “very welcoming and generous” community of artists there. “What is important is to speak to people. That is the social structure which supports artists. Conversations.” Her biggest struggle so far was securing the correct visa. After that was accomplished, she was able to begin integrating herself into the artistic scene.

It’s this scene that I was interested in researching, with its nuances, audiences, and sociopolitical dynamics. 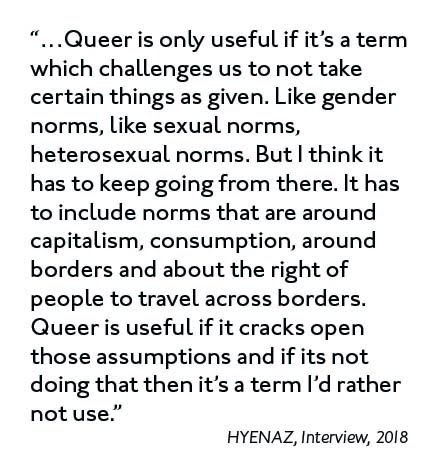 I’m talking with the HYENAZ over Skype. They are eloquent and honest, and we have a lengthy conversation about their practices and philosophies.

HYENAZ are electronic musicians and performance artists, resisting categorization and using their work as a “tool of personal and political transformation.” In Berlin they’ve found an appreciative audience, “…there are enough people who identify as queer so there’s a scene… its possible to have performances that have real political content and there is space and audience that support that.”

We spoke about some of the harsh realities of working as an artist in Berlin. As more artists flock to the city, the newcomers are having “a much harder time getting established.” They get caught up in the hustle, having to work all the time to make ends meet. Aside from the need to earn money, there is also competition.

“Even public funding of art is still capitalistic in the end because there is a finite amount of resources and someone gets it and somebody doesn’t…And there are only so many stages and only so many DJ pulpits and somebody is in there and somebody isn’t in there. And I think that makes us turn against each other to some extent despite the angels of our better nature…to a degree, we’re in a rat race against each other. But it’s not like it’s one thing or the other. It can be a rat race but it isn’t because people commit acts of altruism in that context” (HYENAZ, Interview, 2018).

Competition and community, competition within community, competing despite ourselves. There’s an inherent tension here, which is exacerbated by the rise in the costs of living, influx of artists, and comparatively few opportunities. It’s a catch 22 – the increase of artists has increased diversity and perspectives, creating a rich community and vibrant artistic scene. But it also means fewer people have access to the resources that are there. In the words of multi-media artist Isaac Chong Wai, “We also say that there is only one cake, but too many people to share the cake, so, it is difficult to even get a bite of the cake.” He’s been living in Berlin for the past two and a half years, and has found that it takes some time to integrate as a foreign artist in the city. 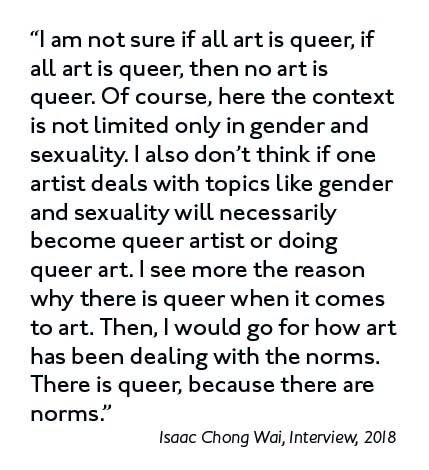 Viron Erol Vert, a visual artist who has been living in Berlin since 1994, has witnessed life becoming increasingly difficult as more artists come to the city. Despite these challenges, people still come, and many stay. I asked him why. His answer combined hedonism with history:

“It is a quite hedonistic place and I’ve always liked the honest working class attitude in Berlin’s nature that is linked to the history of the city. In Berlin you have quite a wide range of possibilities of combining various forms and ways of life…Friedrich the Great, one of the former Prussian kings, who had a big impact on Berlin’s history, said once ‘Jeder nach seiner Facon,’ which means something like, ‘Everybody should live how they wish.’ There is a certain tradition in this free spirit, even if we know of course, that history shows us other moments in the story of this city… Later I found out that Friedrich the Great was gay and his father, the former king, had killed his Lover, an officer of the Prussian Army, in front of his son’s eyes. What a tragic, melancholic story almost like a sad fairytale.”

Dusty Whistles, a “post human drag queen”, has lived in Berlin for 11 years, and spoke of problems she has witnessed: “The pace of gentrification, the scarcity of housing, and the stagnation of wages, coupled with the erasure and eviction of spaces of community and resistance has left me doubting any kind of sustainable longevity within this city.”

Doubtful, but hopeful, Dusty spoke also of the community she has found in Berlin, which she cited as a source of strength and validation. “We can find each other in a gallery, in the street, in struggle, or for hours in a toilet stall. There is a kind of communizing potential of the social landscape of the city; the nightlife in particular, a kind of smooth space occupied by packs and nomads. I’ve met a lot of allies and co-conspirators there.” 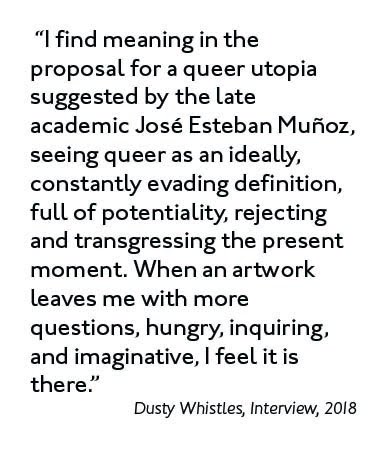 Curator and artist, Coral Short, offered an optimistic perspective: “there’s no better place on earth at the moment than living in Berlin as an artist.” Her enthusiasm is based in artists’ “energy and commitment towards their unique practices,” a willingness to help one another, and access to free or cheap venues.

As a curator, she works on inclusion and accessibility: “I take my role as curator very seriously, and work hard to have half of each bill consist of QTPOC (Queer Trans People of Color) artists… I try to keep my events outside of stiff museums – my father is working class and taught me about art. I think that by having screenings outside of institutions – this keeps it radical – and makes it more accessible for many queers who do not feel comfortable inside museums for many reasons. I try to do my events in different neighborhoods in Berlin so many people can access them.”

A shortage of financially accessible venues and workspaces is an issue. Yoav Admoni, artist and director of betOnest, has created a space in response to this problem. BetOnest is an artist residency at a semi-abandoned cement factory in the German countryside. “For me the purpose of betOnest is to form an alternative to the conditions we work in as artists. I hope to sustain and grow a place which is accessible, affordable and inspiring.” While the space is not exclusively for queer artists, it has been the home for several queer-related projects (such as Murmurs, a queer sound art residency, organized by Coral Short, Alex Tsoli, Jean Park, Orion Twinkle and Winnie SuperHova). Giving space to queer artists is a fact which Yoav says was unintentional, but something that has become increasingly important to him. 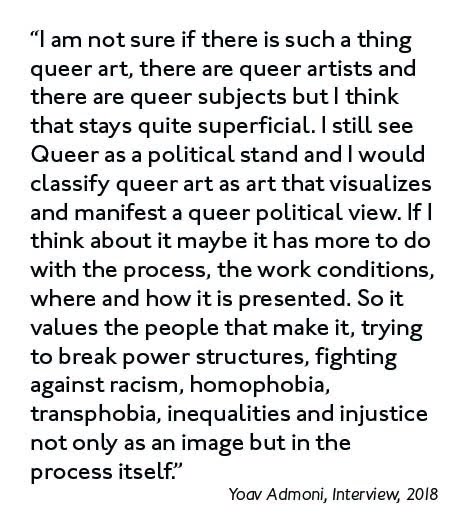 My conversations with the artists followed two parallel threads: one on the nature of “queer” art in general, and another focusing on the scene in Berlin. Sometimes the two converged, in a nexus of politics, identity, and art. While most of my questions about Berlin found clear answers, ones that didn’t surprise me, the interviews left me with more queries about the notion of queer art – its place, validity, and inherent politic. As someone who identifies as queer and is also an artist, and who finds herself visiting Berlin with increasing frequency, I cannot avoid the personal relevance of these lines of inquiry. But curiosity can be the driving force behind creation.

Article by Lori Baldwin, an artist, writer, and cultural organizer creating havoc and play by facilitating inclusive party spaces and performance events. She is originally from the USA, and lives and works in Budapest. She has been making original performance work both in collectives and individually since 2009. Her current performance work explores themes of intimacy, sexuality, anger, and desire.