From Leaving London To Lockdown Collaboration

To deliberately misquote Groove Armada, “Goodbye Nightclub, Hello Country”. Back in my 30s, I thought London and I would be married for life. But then as the years progressed, our relationship became more strained, and suddenly we began talking about our D.I.V.O.R.C.E.

Four years ago, I finally made the tough decision to leave the capital and after a 17-year stint living in London, I relocated my studio practice back to my home county of Shropshire. As much as I still love London, and try to get back at least once a month to see friends and get my culture fix (although obviously the pandemic has put pay to that for now), a sufficient number of small factors had mounted up to the extent that I clearly had to re-evaluate my situation. One of the reasons was that after 15 years of working as a technician at the V&A (it’s amazing how many artists and musicians work as museum technicians), a substantial amount of my colleagues had moved on, so sadly the atmosphere of a fun working environment had changed. However, as is probably the main gripe of most current London-based artists, I found that the glut of affordable art studios had long since disappeared, and this was my main reason for relocating. 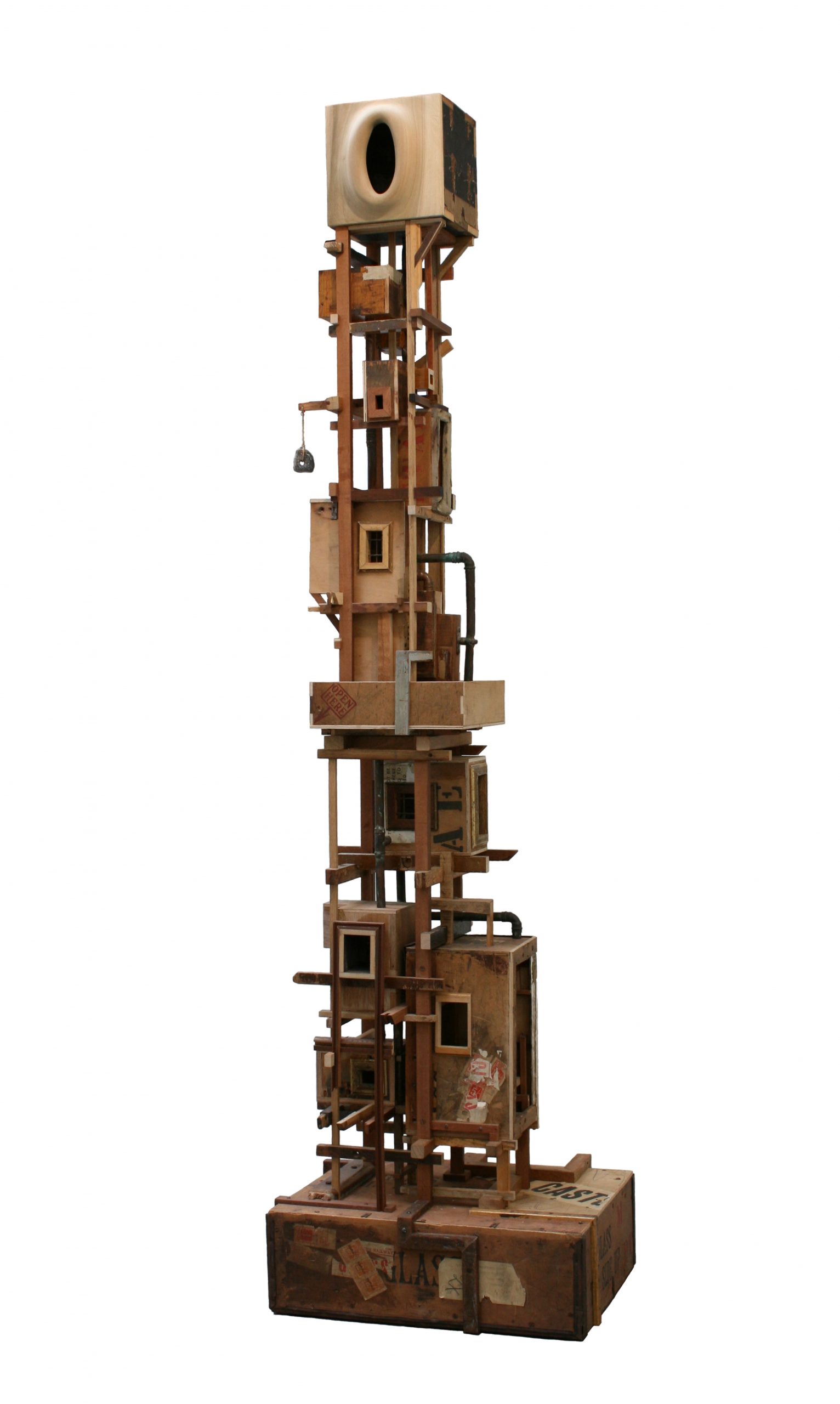 When I first moved to London’s East End there were plenty of large, cheap, although definitely not luxurious, spaces for artists to take over. I spent many eventful years living and making art in old shops and warehouses (which brings me to my big tip for any artist wanting to make work while still getting a decent night’s sleep – never share a warehouse with three unemployed DJs). But that was a long time ago. Now, with the gentrification of the East End, an ever increasing number of hipsters moving into the area (willing to pay exorbitant rents), and developers knocking down artists’ studio spaces and putting up high-end apartment blocks in their place, any studio spaces that artists are now able to find tend to be either too small, extortionately priced, and/or not fit for purpose.

When I left Shropshire in the mid-nineties I didn’t think that I’d ever move back, but surprisingly it’s worked out well for my art practice. I now live alone (for the first time in my life – and I’m loving the freedom it affords me) in a very ordinary-looking house in a small semi-rural town. I use the house itself as a live/work space with bedrooms converted into studios and the garage, conservatories, and sheds serve as workshops and storage areas. And having a garden allows me the luxury of space to work on messier or larger scale sculptures whenever I need to. Also, living in the Midlands, with a nearby train station, affords me reasonable access to pretty much anywhere in the country. Being a sculptor whose main medium is found materials, I’m a bit of a hoarder (anyone who knows me would laugh at the term ‘a bit of’), so when I first moved back to Shropshire I turned to Ebay as a way of reducing my ‘hoard’. It turned out that this, coupled with a few hours a week working as a carer for a disabled friend, proved enough to pay the bills and allowed me a lot more time to concentrate on making art than when I’d been living in London.

As the practice of being an artist involves long periods of solitary work, I have found, as I’m sure many other artists have, that lockdown hasn’t affected my daily routine that greatly. While it would be lovely to still occasionally meet up with friends in person and have greater travel freedom, I’ve now embraced the benefits of online social interaction in a way that I probably wouldn’t have if the coronavirus hadn’t struck. Before the pandemic I’d never even heard of Zoom. Now I use it to chat with other artists and friends, join online social gatherings, and have even been interviewed by the head of a college art and design so that his students can start a project based upon my work.

Now through a mixture of online social interaction and carefully maintained social distancing, I am engaged in an exciting new art collaboration project called ‘Unlockdown’. This started around month or two ago when I was approached by the talented and prolific artist, Sharon Griffin (@sharongriffinart on Instagram), about us collaborating on a sculptural project together. After hearing her proposal I immediately said yes. Before we physically started on the project we had one of those lovely, several hours-long, joyfully meandering conversations about creativity and the themes that influence our work – themes such as identity, memory, growth, containment, the resonance of found materials, the self… all the usual good stuff. Even though the project is still in its infancy, some of the elements of our initial conversation have already bled into what we have produced so far. 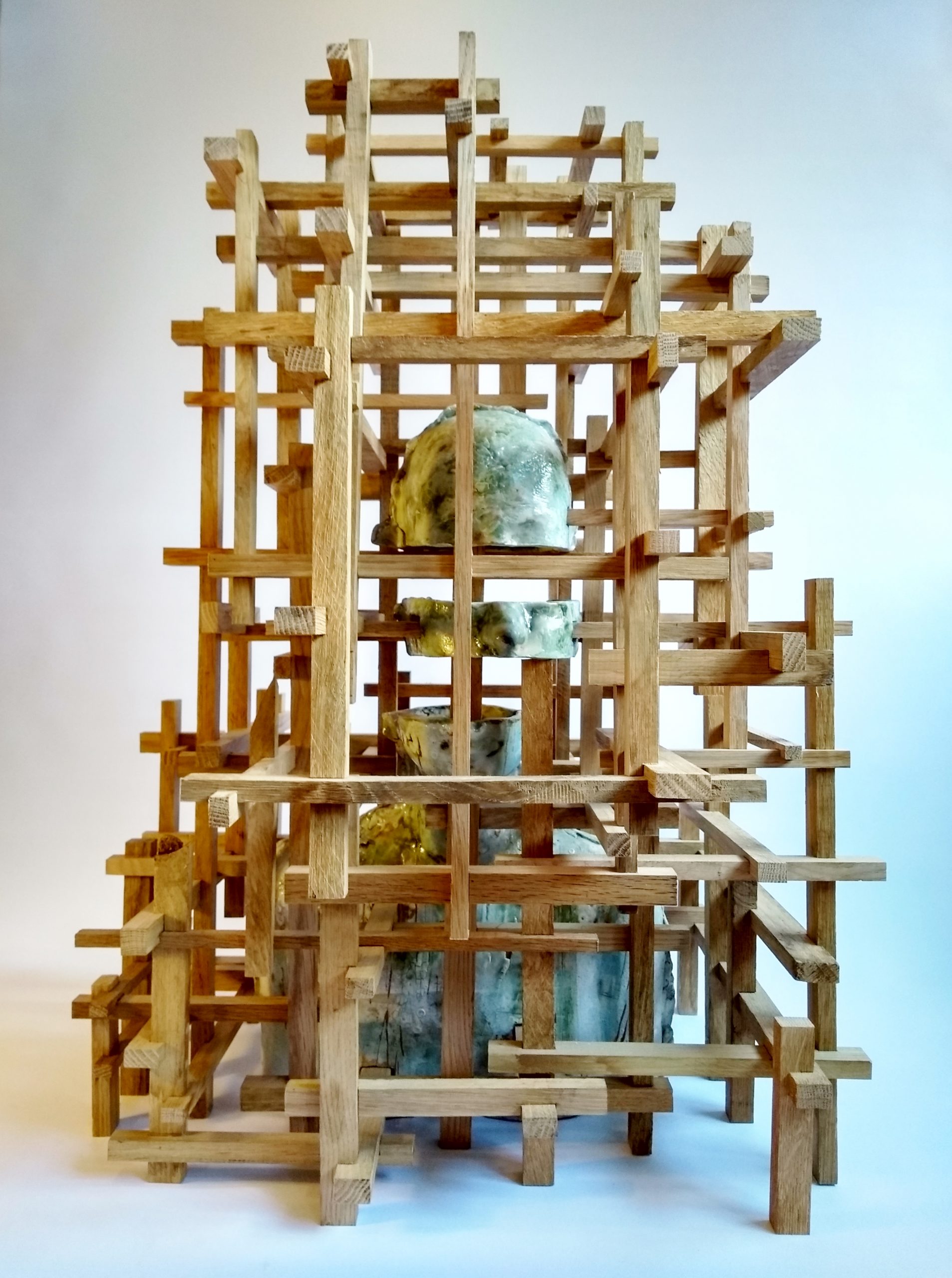 Although not exactly an ‘exquisite corpse’ in its truest form, ‘Unlockdown’ does share some of the same elements. What we have undertaken is to produce a series of experimental sculptures whereby Sharon kicks off the creation of each new sculpture by giving me a clay bust of a relatively androgynous-looking figure, taken from a plaster cast mould that she made from her original sculpture. I then alter the bust in some way, before returning it to Sharon. She then performs her alchemy by applying some of her glazes (created from her own recipes, using locally sourced geological ingredients – apparently the variety of geological conditions in Shropshire are unmatched within the British Isles or, within such a relatively small area, probably anywhere else in the world), and fires the piece. Following that, she hands the piece back to me for next stage, in which I integrate it with other manipulated materials.

I will say that at each stage of the handover, we are observing the correct and responsible levels of social distancing that these COVID-19 times demand.

Even though the starting point for each piece in the collaboration, i.e. a clay bust, is close to identical, every time Sharon hands it over to me she doesn’t know what it’s going to look like when I give it her back. And likewise, I don’t know what it’s going to look like after the glazing and firing process (and any other alterations that Sharon might have made pre-firing). This is one of the many exciting elements of the collaborative process. Another is the verbal interaction. I had forgotten just how exciting it could be to talk to another artist about art – and how two creative minds can both feed off and boost one another.

Although Sharon works predominantly in clay and I work in… well, pretty much anything I can get my grubby hands on, we have a lot of things in common – a love of nature and the earth and of manipulating materials. We share many similar views, we’re both from the same part of Shropshire, and both have similarly odd family backgrounds. Luckily we also have enough temperamental differences to hopefully keep one another in check and to be able to maintain a balanced view of the project. 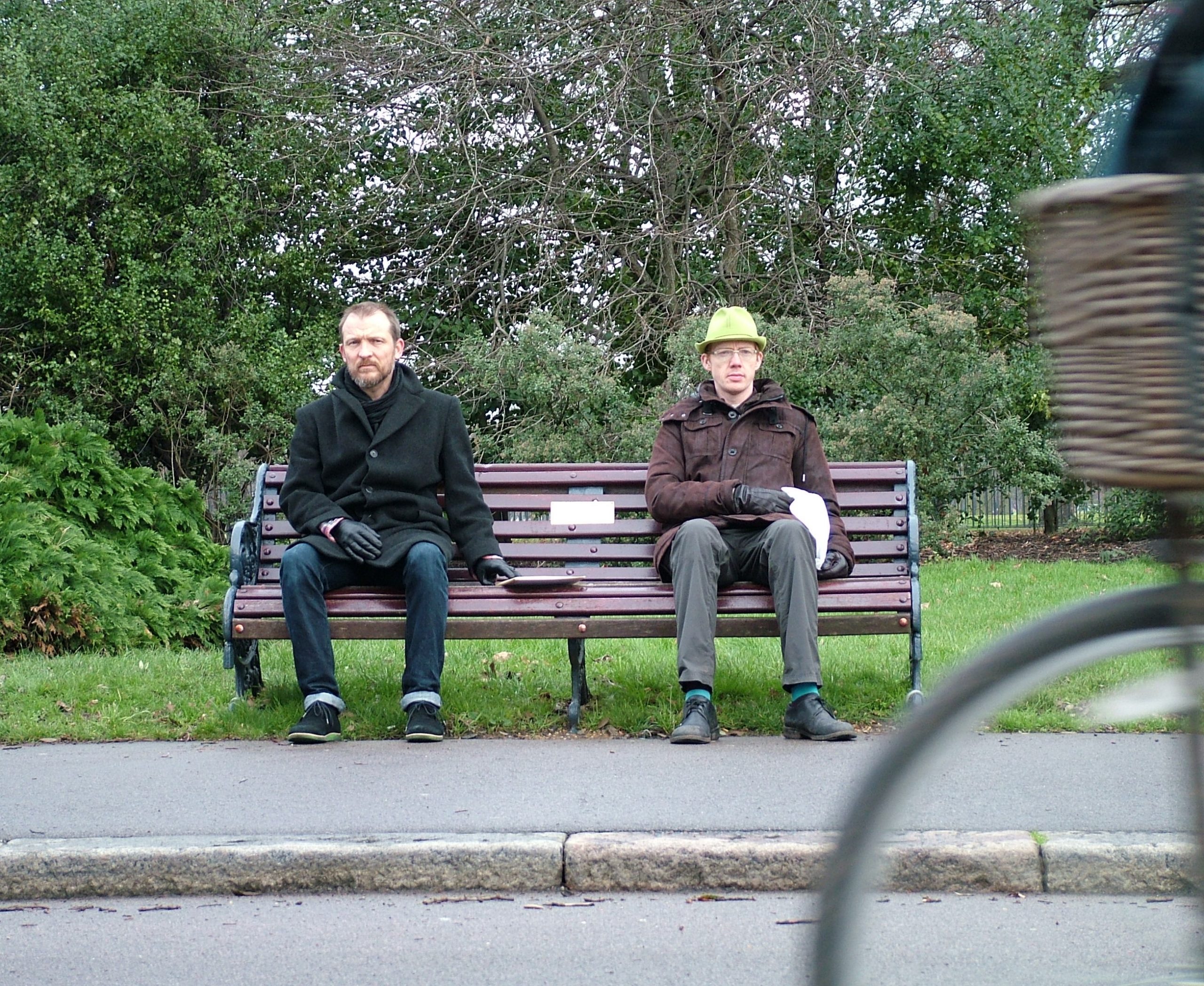 I’m very excited to see where our collaboration takes us. This is only the second time that I’ve collaborated with another artist. The other time was a 12-year-long project with the performance artist, Calum F. Kerr. Calum and I have yet to exhibit anything from our collaboration but, considering our joint enthusiasm for ‘Unlockdown’ and Sharon’s exuberant drive, I’m pretty sure that the fruits of this collaboration will not have to wait too long to find a viewing public. We’re already applying for a stand at next year’s Collect art fair at Somerset House, and are looking into crowdfunding so that we can afford to pitch the project to even more open calls and fairs. We view our collaboration as an ongoing project that will develop alongside our individual practices, and we’ll just let the body of work within ‘Unlockdown’ keep growing until it finds its own path.

Coming from an illustration background, Chisnall is now more well known for his sculptures, paintings and prints; winning a Royal British Society of Sculptors Bursary Award. As well as exhibiting internationally, his work features in articles, interviews (with two features in The Huffington Post), books, magazines, films and TV; including BBC 2’s ‘The Culture Show’, Channel 4 News, London Live, and Channel 4’s ‘Four Rooms’. Chisnall also organises and runs workshops for schools, hospitals (including Great Ormond Street Children’s Hospital) and businesses. He was the recipient of the 2017 Dyslexia Awards, Amazing Art Award. John Malkovich, chose Chisnall’s script, ‘Doppelganger’, as the winning entry in the 2008 Sony Scriptwriting competition; later turned into the short animated film, ‘Snow Angel’. He has work in various international collections, including the Black and Gold Museum, Saudi Arabia, and also works for commercial clients – designing interior artwork and decor for the Ping Pong restaurant chain.